"Rain of the Ghosts" Moves to AudioPlay and Kickstarter 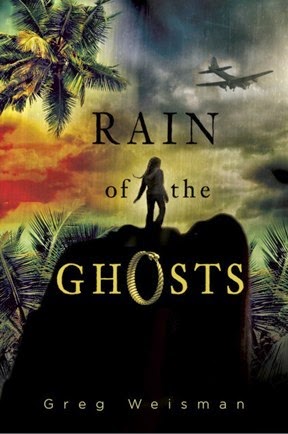 Rain of the Ghosts is a Young Adult Paranormal adventure about Rain Cacique, a 13-year old girl living on the Ghost Keys, a chain of islands on the edge of the Bermuda Triangle.  In this first book of the series, Rain discovers she has the ability to speak with ghosts and that a family heirloom holds the key to an ancient secret that mysterious forces want to stop her from learning.

The voice work is already recorded and Greg is running a Kickstarter to complete the post-production at https://www.kickstarter.com/projects/1693681637/rain-of-the-ghosts-full-cast-audioplay

“This is not a standard audiobook recording, with one guy reading a novel from front to back, struggling to play all the characters, male and female, without any help from music or effects,” says Weisman.  “No, this is a full cast recording: an unabridged AudioPlay with twenty actors, sound effects and a full musical score.  It’s got everything but the visuals – and I promise it’ll fire your imagination enough so that the images will be there too – right inside your head.  This is a studio-quality production without any studio backing or studio interference.”

Rewards include pre-orders of the AudioPlay, dinner with Greg & cast members, as well as an Associate Producer credit on the final product.

About Greg Weisman
Greg Weisman (BA Stanford, MPW U.S.C.) has been a storyteller all his life. His first professional work was as an Editor for DC Comics, where he also wrote Captain Atom.

Greg worked at Walt Disney Television Animation from 1989 through 1996. In 1991, Greg created and developed a new series for Disney: GARGOYLES, becoming Supervising Producer and Supervising Story Editor of that series.

In 1998, Greg became a full-time Freelancer. He wrote the new Gargoyles and Gargoyles: Bad Guys comic books for SLG Publishing, while producing, writing, story editing and voice acting for Sony’s The Spectacular Spider-Man. He then moved over to Warner Bros., where he produced, story edited, wrote and voice acted on the new series,Young Justice, as well as writing the companion Young Justice monthly comic book for DC.

Greg was a writer and Executive Producer on the first season of Star Wars Rebels for Lucasfilm and Disney, and he’s also writing the spin-off comic Star Wars Kanan: The Last Padawan. His first novel, Rain of the Ghosts, was published in 2013; its sequel, Spirits of Ash and Foam, arrived in bookstores in 2014.