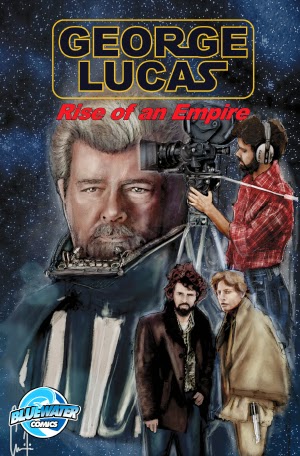 Bluewater Productions is proud to announce the release of a comic book featuring the life of filmmaker and geek icon George Lucas. “Orbit: George Lucas: Rise of an Empire” is available in print and digital this week.

A creative force whose pioneering efforts in the area of sound production and special affects forever changed the way we view movies, George Lucas found fame in 1977 with the release of his magnum opus, “Star Wars.” In that moment, the master filmmaker shaped geek culture for generations.

"Bluewater receives a lot of requests from fans and famous people to tell the stories of the famous and the infamous using this unique medium, and George Lucas has been at the top of that list for a long time,” says publisher Darren G. Davis. “With interest in his creative work swelling, now was the time to tell his amazing story.”

Bluewater has focused on other personalities such as Conan O’Brien, David Letterman, Carrie Fisher, Ray Harryhausen, and Stephen King. All are available on Amazon as well as Nook, Kindle, and ITunes. Bluewater’s biographies have hit the top ten books on Amazon as well drawn the attention of hundreds of news outlets, including New York Magazine, People Magazine, Forbes, MTV, CNN, and The Today Show

Posted by Leroy Douresseaux at 7:23 PM