Review: Imaginative "Guardians of the Galaxy" is Charming and Fun 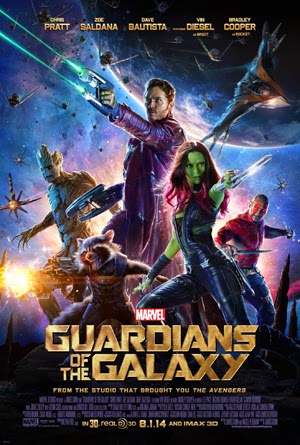 Guardians of the Galaxy is a 2014 science fiction action film and adventure comedy from director James Gunn and is produced by Marvel Studios.  The film is based on the comic book, Guardians of the Galaxy (2008), which was created by Dan Abnett and Andy Lanning.  The film focuses on a human and a ragtag band of aliens who take on a warlord bent on galactic destruction.

Guardians of the Galaxy opens in 1988 where a young boy named Peter waits in a hospital where his mother is dying.  Shortly after she passes, the boy is abducted by the Ravagers, a group of space pirates.  26 years later, Peter Quill (Chris Pratt) is Star-Lord, and he is also a wanted man.  He arrives on the planet Morag, where he steals a mysterious orb that he is supposed to give to the leader of the Ravagers, Yondu Udonta (Michael Rooker).

However, the orb holds incredible power, and a fanatical alien named Ronan (Lee Pace) wants to use the orb's power to destroy the planet Xandar.  Ronan sends an assassin to get the orb from Quill.  On the run, Quill unites a ragtag band of oddballs:  the assassin, Gamora (Zoe Saldana); the genetically-engineered raccoon, Rocket (Bradley Cooper); the tree-like humanoid, Groot (voice of Vin Diesel); and the revenge-seeking Drax (Dave Bautista).  They may be the only ones who can save the galaxy and maybe even the universe.

Guardians of the Galaxy's production values rival and even exceed (in some cases) most recent science and space fantasy films, including the Star Wars prequels.  The artists behind this film's production design and art direction build an entire new galaxy filled with amazing worlds and places from the ground up, with eye-popping and dazzling results.  The costumes are as creative as what is worn in the kind of costume dramas that usually earn Oscar nods for their costume design.  The make-up, both effects and hair-styling, is probably the best ever seen in a film based on a comic book.

Visually, Guardians of the Galaxy is a most unusual and imaginative film, but it is also familiar.  It is thoroughly infused with the spirit of Star Wars (1977).  Like the original Star Wars film, Guardians of the Galaxy is a lavish sci-fi movie spectacle with elements of Western and pirate adventure films.  It is fun to watch, and by the end of it, I was eager for a sequel.

Maybe co-writer and director James Gunn has created Star Wars for a new generation.  He has a fine cast of actors; a cool universe populated with awesome beings, places, and things.  Gunn also has what seems like an imagination full of ideas that want to get out and sparkle on the big screen.  Gunn can do really good things with this film as the start of a new franchise.  In the meantime, we can enjoy this first film.  Like Men in Black and Independence Day, Guardians of the Galaxy is a sci-fi blast that thrills every viewer who can enjoy the wonder of a great space adventure.

Posted by Leroy Douresseaux at 5:21 PM