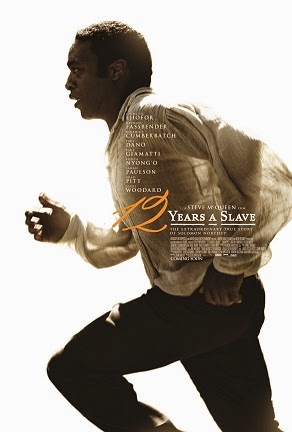 12 Years a Slave is a 2013 historical drama and period film from director Steve McQueen.  The film is based on the 1853 memoir and slave narrative, Twelve Years a Slave.  At the 86th Oscars, 12 Years a Slave became the first film directed and produced by a black filmmaker (Steve McQueen) and also the first film to be written by an African-American (John Ridley) to win the Academy Award for “Best Motion Picture of the Year” (for the year 2013).  12 Years a Slave the movie is the story of a free black man from upstate New York, who is kidnapped and sold into slavery in antebellum Louisiana.

12 Years a Slave introduces Solomon Northup (Chiwetel Ejiofor), a free black man.  In 1841, Solomon lives in New York with his wife, the former Anne Hampton (Kelsey Scott), and his children, Alonzo (Cameron Zeigler) and Margaret (Quvenzhané Wallis).  Solomon works as violinist, and that is what gets him the offer of a two-week job as a musician in Washington D.C.  What Solomon does not realize is that this job offer is a trap.  His erstwhile employers drug and abduct him, and later sell Solomon to a slave trader in New Orleans.

The slave trader gives Solomon a new name, “Platt.”  He is sold first, to sugar cane plantation owner, William Ford (Benedict Cumberbatch), and then, to cotton plantation owner, Edwin Epps (Michael Fassbender).  It is on Epps' plantation that Solomon meets Patsey (Lupita Nyong'o), a young female slave.  Through her, Solomon learns the true depravity of slavery and falls into despair, believing that he may never see his family again.

12 Years a Slave is not only the best film of 2013, it may also be the best film of the 21st century.  Everything about it is magnificent.  Steve McQueen's directing is a work of art – truthfully.  McQueen stages and composes this film with a painter's attention to detail, dedication to story (both narrative and message), and an artist's quest for the sublime and for even the divine.

McQueen creates a sense of intimacy between his characters – master/slave, oppressor/oppressed, abuser/abused – so that the action and emotions between characters feels like the interactions between real people.  This is a masterstroke in film-making, with the film drama having the power and immediacy of stage drama.  Hans Zimmer's evocative and heartbreaking score has uncannily perfect timing and tone in emphasizing story, setting, and mood, and also in embellishing and strengthening McQueen's choices.

12 Years a Slave is buttressed by three incredible and dumbfounding performances that are also works of art.  Damn, you could take the performances given by Chiwetel Ejiofor, Michael Fassbender, and Lupita Nyong'o, individually, in pairs, or as a trio, and hang them on a museum wall.

Fassbender could become the most honored actor of the next quarter-century the way that Daniel Day-Lewis has been the most honored of the last quarter-century or so.  As Edwin Epps, Fassbender personifies both the banality of evil of slavery and also of the institution's naked lust for money (as in the need to recoup costs and to make even more money).  Fassbender received an Oscar nomination as best supporting actor in 2014, but lost to Jared Leto as the cartoonish stereotype, Rayon (in Dallas Buyers Club).  That's a shame and maybe even a tragedy.  For real, it should have been Fassbender's.

On the other side, as Patsey, Lupita Nyong'o becomes the face of the slaves, especially the face of black female slaves, surviving brutality and enduring degradation even while wishing for the sweet freedom that death might bring.  The depth, the poignancy, and the prowess of Nyong'o as an actor defy description, but at least she won her Oscar as best supporting actress for her supernaturally good acting.

Chiwetel Ejiofor lost the best actor Oscar to Matthew McConaughey who played Ron Woodroof in Dallas Buyers Club.  McConaughey did deliver an exceptional performance, but the reason film award voters were so impressed with McConaughey in Dallas Buyers Club was because they did not know that he had a Ron Woodroof in him.  Up to that point, McConaughey had spent much of his career playing shallow pussy-hounds, grown-ass men in a state of pathetic arrested development, and leading roles that required him to do little more than give good face.  Being a white man also gave McConaughey an advantage with Oscar voters.

On the other hand, it is easy to take Ejiofor for granted; he is always good.  In film, he has perhaps never been better than he is in 12 Years a Slave.  He carries this movie because it is his character's story, a personal and hellish travelogue into the darkest and cruelest countries of mankind's nature.  Ejiofor opens up his heart, his mind, his personality, his emotions – his very being – to the audience.  Through him, we experience the suffering and dehumanization of Solomon Northup.

I think this movie is, in large measure, about how people will make others suffer for their own material gain and how some humans degrade others for their own satisfaction and pleasure.  Few films have depicted that as well as 12 Years a Slave does.  Maybe, it is indeed too hard for some to watch, but 12 Years a Slave is a great film (one of the greatest of all time), and it is a necessary one – more necessary than some of us will admit.


Posted by Leroy Douresseaux at 7:03 AM