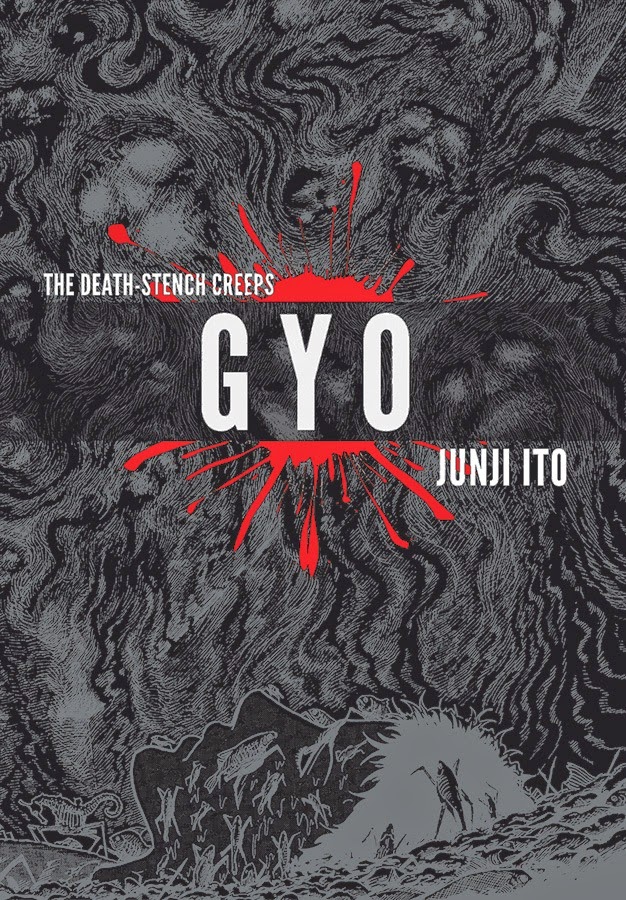 VIZ Media, LLC (VIZ Media), the largest publisher, distributor and licensor of manga and anime in North America, delivers a lavish new edition of one of the manga (graphic novel) genre’s most seminal horror titles with the publication of the GYO Deluxe Edition on April 21st, 2015.

This hardcover version of Junji Ito’s story of an invasion of the Japanese island of Okinawa by mutated sea creatures is presented in a definitive 400 page, 2-in-1 edition that features a new cover design and full-color endpapers. The GYO Deluxe Edition will be published under the VIZ Signature imprint, is rated ‘T+’ for Older Teens, and will carry an MSRP of $22.99 U.S. / $26.99 CAN.

In GYO, the floating smell of death hangs over an island. What is it? A strange, legged fish appears on the scene... So begins Tadashi and Kaori's spiral into the horror and stench of the sea. Here is the creepiest masterpiece of horror manga ever from the creator of UZUMAKI, Junji Ito. Hold your breath until all is revealed.

“GYO is a truly unsettling work of horror, and this new Deluxe Edition presents the definitive version of the story in a handsome format,” says Masumi Washington, Senior Editorial Director. “Ito’s art will transform your mind, and like the sea life and human characters in GYO, you will never be the same again.”

Manga creator Junji Ito made his professional debut in 1987 and has gone on to be recognized as one of the greatest contemporary artists working in the horror genre. His critically acclaimed titles include TOMIE and UZUMAKI, which were adapted into critically praised live-action films, while GYO has been adapted into an animated feature film. The UZUMAKI and GYO manga editions are both published in English by VIZ Media in deluxe hardcover editions available under the VIZ Signature imprint. VIZ Media is set to publish Ito’s FRAGMENTS OF HORROR in the Summer of 2015. Junji Ito’s influences include classic horror manga artists Kazuo Umezu and Hideshi Hino, as well as authors Yasutaka Tsutsui and H.P. Lovecraft.