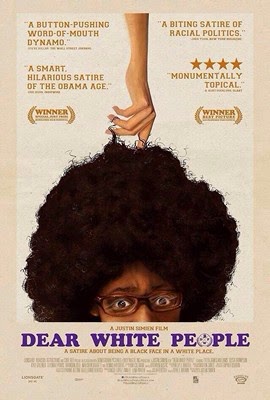 Dear White People is 2014 comedy-drama and satirical film from writer-director, Justin Simien.  The film is set at an Ivy League-like university that is facing racial discord, and the story focuses on four particular African-American students.

Dear White People is set at Winchester University, a prestigious and predominantly white school with an Ivy League pedigree.  A recent decision by the school's administration has caused a stir among the African-American student body.  Samantha “Sam” White (Tessa Thompson) has used the controversy, via her radio show, “Dear White People,” to spur fellow black students to action.

Sam's former boyfriend, Troy Fairbanks (Brand P. Bell), is trying to hold onto his position as “head of house” of Armstrong/Parker, an all-black dormitory.  Troy really wants to be a comedy writer, but his father, Dr. Walter Fairbanks (Dennis Haysbert), is Dean of Students.  Dean Fairbanks does not want his son doing anything that might give white people a chance to profile the young man who has a promising future.

Lionel Higgins (Tyler James Williams) is a freshman who is trying to find his place on campus, but he is gay and a blerd (black nerd or fanboy), which makes him an odd-man-out.  His housemates harass him, and the chief tormentor is Kurt (Kyle Gallner), the son of Winchester's President Hutchinson (Peter Syvertsen).  Meanwhile, black student Colandrea "Coco" Conners (Teyonah Parris) is determined not to pegged as being 'hood or from the ghetto.

While watching Dear White People, I often thought of Spike Lee's 1988 film, School Daze, which was the first Spike Lee film I saw and which remains a personal favorite.  Both films are driven not so much by plot as they focus on characters and settings.  Lee's film is set at a HBCU (historically black college or university) and focuses on class strife among black students and also delves into how African-Americans often discriminate against each other based on how light-complected or dark-skinned he or she is.

Dear White People is set at a predominantly white school, but focuses on mostly black students.  The film's writer-director Justin Simien seems to make several pointed statement:  Back people don't exist to entertain white folks.  Black people are not here to provide fodder for white people's curiosity and prejudice.  Black people's culture, pathologies, and the way we live are not to be exploited so that white people can mock us at their leisure.

With a great many characters comes a great many motivations and conflicts, and that causes the story in Dear White People to lose focus.  There is so much going on in this movie that it is practically a pitch for an original cable television series, because only a serial comedy-drama could do Justin Simien's ideas and angles justice.

Still, the movie is especially interesting.  It was almost as if I could not stop watching it.  Plus, Tyler James Williams as Lionel Higgins and Teyonah Parris as “Coco” Conners give star-making turns.  Their performances make their characters the most interesting in this film, by far.  If Ms. Parris were a white actress, this role would have earn her roles in several high-profile films for at least the next two years, some as the female lead.

The sky is the limit for Williams.  I think so after watching him make Lionel force Tessa Thompson's Sam to share the spotlight as Dear White People's signature character.  There is a moment in the film when Lionel tells Dean Fairbanks that in high school, he had more trouble from his Black classmates.  It takes guts and talent to pull off a moment like that, and Williams has both.  And Dear White People is better for his performance.

Also, a video of members of the University of Oklahoma chapter of the fraternity, Sigma Alpha Epsilon, performing a racist chant/song was recently made public.  In the wake of that incident and the subsequent fallout and controversy, Dear White People is now more relevant than ever.

Posted by Leroy Douresseaux at 8:01 PM