Review: "The Smurfs" Movie is Smurfy 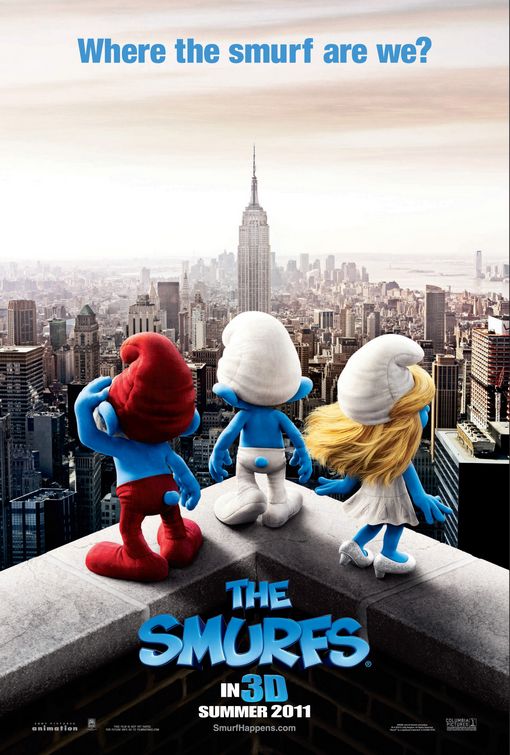 The Smurfs is a 2011 fantasy movie and family comedy film from director Raja Gosnell.  Presented in 3D, The Smurfs is a hybrid live-action and computer-animated movie, because many of the characters and scenes are created using computer-animation (also known as CG animation).  The Smurfs movie finds the tiny blue Smurfs chased by the evil wizard Gargamel from their magical world into the real world.

The Smurfs, originally known in French as “Les Schtroumpfs,” began as a Belgian comic created by Belgian comics artist Peyo (the pen name of Pierre Culliford).  Over time, The Smurfs became a media franchise that included animated televisions series and movies, dolls and toys, and theme parks, among many things.  The huge popularity of the Smurfs in the United States is due in large part to the long-running Saturday morning animated series, “Smurfs,” (produced by Hanna-Barbera) that originally aired from September 1981 to December 1989.

I initially did not expect much from it, but I found The Smurfs movie to be a surprisingly well-made and entertaining family film.

The film opens as the Smurfs are busy preparing for their Festival of the Blue Moon.  While his Smurfs are engaged with their work, Papa Smurf (Jonathan Winters) is concerned by a troubling vision he has that involves Clumsy Smurf (Anton Yelchin).  Meanwhile, the evil wizard Gargamel (Hank Azaria) is determined to find the Smurfs’ village, so that he can capture them.  Gargamel wants to extract “Smurf essence” from each Smurf’s body that will in turn give him great magical power.

The Smurfs movie can be overly sentimental, even sappy, and its gauzy version of middle class values may be a bit too flimsy for adults.  One cannot deny, however, that The Smurfs movie is sweet like your grandmother.  That sweetness is personified by two endearing characters, Grace Winslow and Clumsy Smurf; they’re like kettle chips – you can’t get enough of them.

For most of their existence in comics, film, and television, the Smurfs have been drawn, so I did not think I would like computer-generated Smurfs.  The 3D aspect of computer-animation, however, turns the Smurfs into something tangible; they’re like lovable, huggable, little plush figures.  CGI does indeed bring them to life, and the voice performances put the finishing touches that make the Smurfs seem real.

I cannot forget to give Hank Azaria credit for a fantastic performance as Gargamel.  Although known for his voice work on the long-running series, The Simpsons,” Azaria is a superb character actor, and his Gargamel easily surpasses the 1980s cartoon version.  Azaria’s Gargamel is also one of the best villains ever to appear in a live-action children’s film.  Azrael, a combination of real cats and CGI, is also a winning character, in large part because of the “voice” work of the great Frank Welker.  Welker and Jonathan Winters, who voices Papa Smurf, are the only returning voice actors from the 1980s Smurfs animated series.

So, The Smurfs 2011 is sugary and satisfying.  Simply put, if you ever loved the Smurfs, then, you owe it to yourself to see this movie.


Posted by Leroy Douresseaux at 12:54 PM