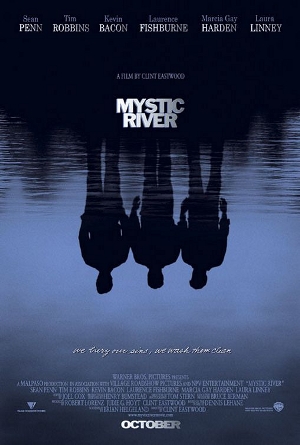 The subject of this movie review is Mystic River, a 2003 crime drama from director Clint Eastwood.  The film is based on Mystic River, the 2001 novel from author Dennis Lehane.  Mystic River focuses on three men who are reunited by circumstance after the daughter of one of the men is murdered.

Clint Eastwood’s film Mystic River was one of the most acclaimed films of 2003, and it earned several Oscar nominations including Best Picture and Best Director.  However, thanks to the onslaught that was The Lord of the Rings: The Return of the King at the 2004 Academy Awards, Mystic River only picked up the two “Best Actor” awards:  Leading Role (Sean Penn) and Supporting Role (Tim Robbins).

Jimmy Markum (Sean Penn), Dave Boyle (Tim Robbins), and Sean Devine (Kevin Bacon) are three childhood friends reunited after Markum’s daughter, Katie (Emmy Rossum), is found brutally murdered.  Their reunion is at cross-purposes, however.  Markum is small time hood, Devine is the investigator with the State Police investigating Katie’s murder, and Boyle survived being kidnapped and sexually assaulted when the three men were boys.  When Boyle becomes the lead suspect, the reunion spirals towards tragedy.

Mystic River is a very good film, but ultimately it’s a bit too cold for too long.  At times, I could have sworn that I was watching Clint Eastwood directing a drama as a formal dinner party.  Mystic River is professional and slick, as well as being raw and gritty.  The film has weight and gravity, but it all seems so laid back and cool.  Not until the last 20 minutes does the film really begin to unleash a tour de force of film drama, but those closing scenes are alien to the rest of the film.

Mystic River really plays with the idea that people are interconnected; the action or inaction of one has inevitable, although unseen, consequences upon another – neat but pat.  Besides, the award winning performances of Penn and Robbins, Kevin Bacon and especially Laurence Fishburne have the roles that anchor the film and they almost steal the show.  In the end Mystic River is all good, but waits for the closing act to show how really good it can be.  If you like dour dramas with good acting, this one is for you, but it’s not an exceptional work of movie art.