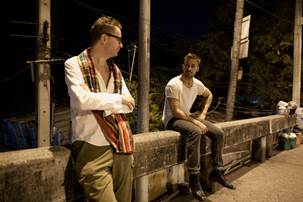 At the age of only 24, he wrote and directed the extremely violent and uncompromising PUSHER (1996). The film became a cult phenomenon and won him instant international critical acclaim. He wrote, directed and produced PUSHER II (2004) and PUSHER III (2005), as a result of his first movie’s growing cult following. The subsequent success of PUSHER II and III, along with the first, created the internationally renowned PUSHER TRILOGY, which premiered at the Toronto Film Festival in 2005. His other films have always enjoyed the support of the leading international festivals: BLEEDER and VALHALLA RISING screened at Venice in 1999 and 2009 respectively, while FEAR X and BRONSON screened at Sundance in 2003 and 2009. DRIVE is Refn’s most commercially successful film to date. Premiering at the Cannes Film Festival in 2011, it won the Best Director prize and was a contender for the Palme d’Or.

Shot in the Chinatown district of Bangkok, Thailand, ONLY GOD FORGIVES marks the second collaboration between Nicolas Winding Refn and Ryan Gosling.

Refn is currently writing his next film, I WALK WITH THE DEAD, co-produced with Wild Bunch and Gaumont, and is also turning his attention to television to develop BARBARELLA.

Posted by Leroy Douresseaux at 6:12 AM