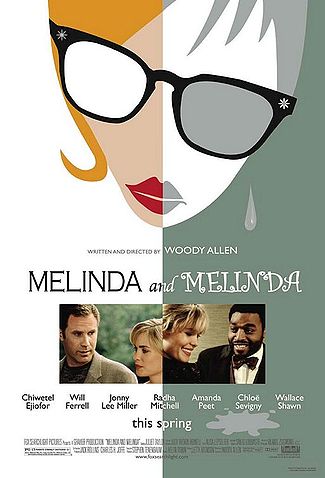 The subject of this movie review is Melinda and Melinda, a 2004 comedy and drama from writer/director Woody Allen.  The film follows two alternating stories about a woman named Melinda’s attempts to straighten out her life.  Fox Searchlight Pictures gave the film a limited release in the United States in March of 2005.  Except for a cameo, Allen does not appear as a significant character in this film.

Over a meal at a restaurant, four friends, two of them playwrights, discuss the essence of life.  Is it comic or tragic?  One of them brings up a story he heard from friends about the unexpected arrival of young woman named Melinda (Radha Mitchell) at a dinner party.  The two playwrights, one who writes tragedies and the other who composes hit comedies, take the incident with Melinda and embellish it, each from his point of view.

Max the Tragedian (Larry Pine) tells a story of doomed love with Melinda as a disturbed young woman who returns to New York City after having several years of misfortune and heartbreak.  She was the bored housewife of a Midwestern doctor, and her affair with a photographer ended the marriage.  Her ex-husband also took the children from Melinda, and her subsequent suicidal depression landed her straight-jacketed in a mental ward.  She arrives at the home of her friend, Laurel (Chloë Sevigny), like Melinda a former Park Avenue princess, and Laurel’s husband, Lee (Jonny Lee Miller), a struggling actor and alcoholic.  Melinda’s arrival hastens the disintegration of Laurel and Lee’s marriage, but Melinda meets Ellis Moonsong (Chiwetel Ejiofor), a smooth talking, handsome, and debonair composer.  They strike up what looks like a promising romance until Ellis notices someone else…

Sy the Comedian (Wallace Shawn) looks at Melinda’s predicament as a romantic comedy.  She is the childless downstairs neighbor of the dinner hosts, an ambitious indie filmmaker named Susan (Amanda Peet) and her husband, Hobie (Will Ferrell) an under-employed actor.  Sy’s Melinda is also coming off a broken relationship, so Hobie befriends Melinda in an attempt to help her find a new love.  However, Hobie falls for Melinda, but he has to suffer in silence when she unexpectedly starts dating an amiable and handsome broker (Daniel Sunjata).  Thus, the film goes back and forth contrasting the fate of each Melinda.

Melinda and Melinda is a decent Woody Allen film, and it’s also a bit different from most of his pictures.  For one thing, he only makes a cameo appearance in the opening sequence that most viewers will probably miss.  However, Will Ferrell’s Hobie of the comedic half of Melinda and Melinda is the stand-in for the neurotic, smart-talking type Allen plays in his films.  The tragic half of the film is quite engaging, but not overly dark and tragic, perhaps because the cast plays it so smoothly and low key.  Mitchell gives a solid performance, and Chiwetel Ejiofor (Dirty Pretty Things) plays Ellis Moonsong as a romantic figure, which lightens up a segment that plays heavily on the notion of doomed relationships.

On the other hand, Ferrell’s performance overwhelms Radha Mitchell’s in the comedic half of the film, and that’s not a bad thing.  The romantic comic angle is mostly flat, and the romance isn’t engaging.  The more Ferrell is on screen the more his comic timing and acting come forward and livens a dull segment into something mildly amusing and somewhat engaging.

Though I’m sad to admit it, I found Melinda and Melinda to be about an average film, sometimes even a chore to watch, and it would be an average film even if someone other than Woody Allen’s name were on it.

Posted by Leroy Douresseaux at 7:14 AM