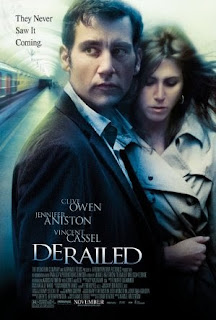 The subject of this movie review is Derailed, a 2005 British-American thriller and crime drama. The film is based on the 2003 novel, Derailed, from author James Siegel. Derailed the movie focuses on a married business executive and his mistress who are being blackmailed by a violent criminal.

Successful advertising executive Charles Schine (Clive Owen) misses his commuter train one day, which lead to a chance encounter with Lucinda Harris (Jennifer Aniston), a seductive financial advisor, on a later train. Charles is having trouble at home. He and his wife, Deanna (Melissa George), are a bit at odds, and their daughter, Amy’s (Addison Timlin), Type-1 diabetes puts a tremendous strain on their finances and marriage. Thus, Charles is responsive to Lucinda’s magnetic attraction, and before long cocktails and lunches turn into an impromptu romp at a seedy hotel.

However, a brutal criminal, Philippe LaRoche (Vincent Cassel), breaks into their hotel room and derails their fun, and the illicit liaison becomes a nightmare world more violent and dangerous than Charles could ever have imagined. Unable to confide in his wife and friends or speak to the police, Charles must battle the violence, deception, blackmail, and crime as the life he once knew becomes something unimaginable.

Derailed starts off so slowly and dully that I thought the movie would never recover, but the film’s second half is a kick in the gut. It’s an old-fashioned hard-boiled, noir-ish, romantic, crime thriller, in the vein of Against All Odds. The film isn’t as well written or directed as such A-list romance and crime movies as Fatal Attraction or Basic Instinct, nor will Jennifer Anniston’s performance be as well remembered (if its remembered at all) as the actresses in the aforementioned films.

Owen and Aniston have zero screen chemistry. Owen is a decent actor, but doesn’t quite seem to fit inside the skin of this role; he’s better as a “heavy” or dark type. He doesn’t at all come across as a vulnerable businessman type (an ad exec of all things), but he does fit the part for the second half of the film. Aniston is a small screen actress. It’s clear to me (at least) that she is one of the luckiest actresses alive. She’s not an incredible beauty, and she is a one-note actress – at best – and thus getting parts way beyond her skill. In fact, Aniston don’t have strong dramatic chops, and as it stands she can’t carry a lead role in a drama. This screen pairing nearly kills Derailed.

However, Vincent Cassel as the supernaturally deceptive and wicked LaRoche is fantastic. Now, he is an actor, and he gives this film a superb lift, turning a disastrous movie about an unlikely affair into an edgy crime thriller that keeps surprising the viewer with its nastiness. Rappers RZA (the Wu-Tang Clan) and Xzibit also add some spicy malevolence and grittiness that seems right off mean streets of big city America. If not for Cassel, RZA, and Xzibit, Derailed would have died on the vine simply by the hands of its director, writer, and stars.

Posted by Leroy Douresseaux at 6:27 AM