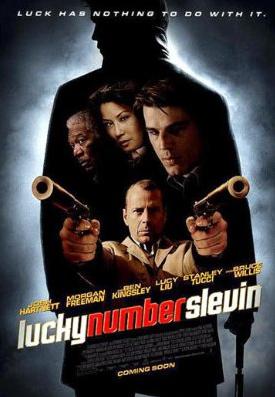 CRIME with elements of mystery and thriller

The subject of this movie review is Lucky Number Slevin, a 2006 crime thriller.  The film is about a young man trapped by a case of mistaken identity that lands him in the middle of a brewing gang war between two rival crime bosses and also makes him the target of an infamous assassin.

Slevin Kelevra (Josh Hartnett) arrives at his friend, Nick Fisher’s New York City apartment only to find him missing, but Slevin does strike up a friendship with Nick’s chatty neighbor, Lindsey (Lucy Lui).  Later, two thugs looking for Nick arrive at the apartment and mistake Slevin for his missing friend.  It turns out that Nick owes a lot of money to two crime bosses:  $96,000 to The Boss (Morgan Freeman) and $33,000 to The Rabbi (Sir Ben Kingsley).

The Boss and The Rabbi, once partners, are now bitter, deadly enemies.  Before long, The Boss wants Slevin to perform a high-profile hit against The Rabbi’s son as a way to pay off his $96,000 debt.  The Rabbi just wants his money, and he gives Slevin a few days to come up with the cash.  And it doesn’t matter to them that Slevin isn’t Nick – that’s just his hard luck.  How unlucky is Slevin?  The infamous assassin, Mr. Goodkat (Bruce Willis), is also gunning for Slevin, or is he?  Slevin suddenly has to hatch an ingenious plot to win this game of death.  And what is the Kansas City Shuffle?

Paul McGuigan (GANGSTER Number 1) mixes sub-genres in his crime flick, Lucky Number Slevin.  It blends noir, gangster flicks, and the con game into a violent little tale of betrayal, crass brutality, and revenge.  The viewer that doesn’t figure out the trick early on will find himself rewarded for having waded through this often slow moving and gabby flick.  Even figuring out the surprise midway through the movie makes the waiting pay off.  Figure out the secrets early on, and you might have to enjoy Lucky Number Slevin’s execution and style.  (Strangely, the direction and writing on this film seem at their best during the flashbacks.)

The performances are good, but not great.  It’s these actors’ status as movie stars – whether it be A-list, B-list, or lower – and their ability to sell a character they’re playing that makes what they’re doing look good and convincing (although Sir Ben Kingsley seems an automatic for the most part).  Meanwhile, Josh Hartnett is a “face.”  He’s handsome and has movie idol written all over him, but he still hasn’t found enough good material to make him iconic.  Lucky Number Slevin isn’t that kind of great material, but it’s good enough for the time being.  Sexy, vulnerable, and utterly sympathetic, Hartnett makes this odd and sometimes uneven tale a sweet treat for fans of crime cinema.