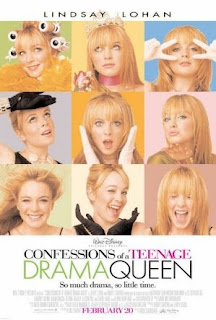 In the movie, Lohan plays a teenage girl who acts as if New York City revolves around her, but finds herself competing for attention after her family movies to the suburbs. Every time I see the movie poster for Confessions of a Teenage Drama Queen, I think, “Great poster, not great at all movie.”

Her name is Mary Steppes (Lindsay Lohan), but she wants to be called “Lola” instead of Mary. Lola is also an avowed New York teenager, but her social life is uprooted when her mother (Glenne Headly) moves the family to Dellwood, New Jersey. Determined to be popular at her new high school, she challenges the reigning Queen Bee, Carla (Megan Fox), for the lead role in a modern retelling of George Bernard Shaw’s Pygmalion.

However, the biggest trick she wants to pull is to get into the farewell concert and after party of her favorite band, Sidarthur. So she drags her conservative, take-no-chances friend, Ella (Alison Pill), along for the ride, but will it cost her Ella’s friendship and her plum role in the musical?

Confessions of a Teenage Drama Queen is a pleasant, but mediocre teen film that will likely find a place only in the hearts of preteen girls and young women just getting into their teenage years. Lindsay Lohan gives her usually spirited performance, and it takes everything she gives (while this is admittedly nowhere near her best) this show to make it tolerable. Luckily co-star Alison Pill’s character is mildly interesting, so the film only rests on Ms. Lohan young, but broad, star presence shoulders 98% of the time. Confessions of a Teenage Drama Queen should be good for the kids, but may likely bore everyone else.

Posted by Leroy Douresseaux at 7:26 AM