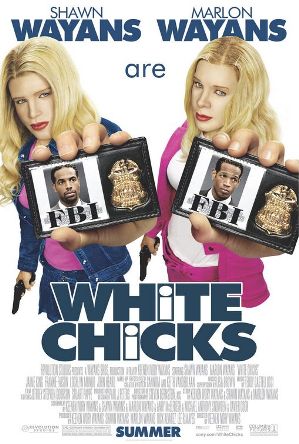 The subject of this movie review is White Chicks, a 2004 buddy cop and crime comedy from director Keenen Ivory Wayans.  The film stars brothers Shawn and Marlon Wayans as two African-American cops who don white-face and drag in order to disguise themselves as two wealthy, young White women.

Kevin (Shawn Wayans) and Marcus Copeland (Marlon Wayans) are two FBI agents with a penchant for doing things on their own that usually gets them into trouble.  After botching a drug bust, they need something to get them back in the good graces of their boss, Section Chief Elliott Gordon (Frankie Faison).  Assigned to pick up two hotel heiresses, the Wilson Sisters, from the airport, Kevin and Marcus also manage to screw that up.

However, an unknown party has threatened to kidnap the sisters during their weekend in the Hamptons.  Kevin and Marcus resolve to foil the plot by adopting the sisters’ identities.  Add state-of-the art makeup and Kevin and Marcus are suddenly white girls.  Before long, they’re undercover living it up as the Wilsons, but how long can they fool the girls’ friends and their fellow FBI agents?  And most importantly, can they fool the kidnappers?

White Chicks isn’t a great movie, but like director Keenen Ivory Wayans’ other directorial efforts, the film is so funny that it might make you howl.  The plot is not even thick enough to be paper thin, and its bare existence is strictly as a prop for the premise – two black men use state-of-the-art makeup to be white chicks.  The script, by the three Wayans and three other screenwriters, is a succession of silliness meant to be funny, and most of the time, it works.

Though the Internet might be filled with the cacophony of idiots crying that White Chicks is reverse racism – black people making fun of whites (as if African-American filmmakers could make up for nearly a century of horrific screen images of black folk), the film is respectful towards its subject matter; it’s more laughing with than at.  All the characters are foils and butts of jokes; no one is really treated as being better than anyone else.  Even the film’s villain is hardly menacing.  White Chicks is about laughs and having a good time at the movies.  It might fail at being film art, but it’s funny.