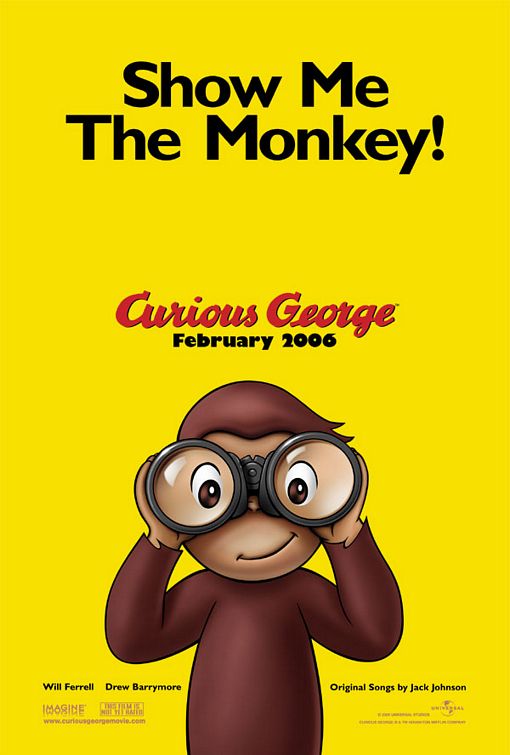 Curious George and his pal, The Man in the Yellow Hat, the heroes of the Curious George series of children’s books created by H.A. and Margaret Rey come to life in the 2006 animated film, Curious George.  The film is the only hand-drawn animated film to be released by a major studio this year, in this case Universal Pictures.  There are, however, some computer-animated of CG backgrounds, sets, and objects used throughout the film.

Ted (Will Ferrell) is a highly enthusiastic guide at the Bloomsberry Museum, but one day he learns from the museum’s owner, Mr. Bloomsberry (Dick Van Dyke), that the museum will be closed because of meager attendance.  Mr. Bloomsberry’s son, Bloomsberry, Jr. (David Cross), is actually glad the museum will close because he plans on turning the museum’s site into a parking garage.  Knowing that it will take an amazing new exhibit to attract more visitors to the museum, Ted (the name given to The Man in the Yellow Hat for this movie), embarks on a trip to the jungles of Africa to find and bring back a priceless artifact, a gigantic idol located in The Lost Shrine of Zagawa.

Although Ted doesn’t find the idol, a mischievous and inquisitive monkey (actually a chimp) finds Ted, who is dressed in a yellow getup topped off by a big yellow hat.  Ted befriends the monkey, and when he leaves Africa crestfallen at failing to secure a giant idol, the monkey follows him and secretly stows away on the boat back to America.  Upon returning to the big city, Ted is horrified to discover his simian friend has followed him.  Although the monkey, which he names George (Frank Welker), is a troublemaker, Ted soon befriends him and they’re off on an adventure to save the Bloomsberry Museum.

Using illustrator H.A. Rey’s style guide of primary colors as the pallet, the animators of Curious George have created a traditional animated feature film with the warmth and feeling of something like classic Walt Disney hand drawn animated films.  They succeed so well at creating quality 2D animation that whenever CG intrudes, the computer stuff looks like a rude guest or even a party crasher.  Luckily, the luminous, hand-drawn animation surpasses any techno disturbances in the movie.

The voice acting works well, and David Cross as Bloomsberry, Jr. offers a surprise in the way he quietly steals scenes.  Will Ferrell dials back his hyperactivity to make Ted witty, humble, self-effacing, and a man with a good sense of humor who only occasionally drops a sarcastic bomb.  Frank Welker (the voice of “Abu,” Aladdin’s monkey sidekick in Walt Disney’s Aladdin films) adds the cooing, chattering, and gentle sounds of George that create harmony with Ferrell as Ted.  Songs by popular recording artist Jack Johnson (In Between Dreams) and the score by Heitor Pereira (Dirty Dancing: Havana Nights) capture the essence of George’s inquisitive nature and his need to touch and feel the world around him and also the nature of the bond between Ted and George.

Curious George is an animated film for children who identify with George the nosey explorer, and if their parents have the ability to understand how and why George’s curious nature appeals to children, they’ll be down with this rascally chimp, too.  For the rest: some of us may find that the lovingly crafted, old-fashioned 2D animation will blind us to whatever faults this flick has.


Posted by Leroy Douresseaux at 9:18 AM