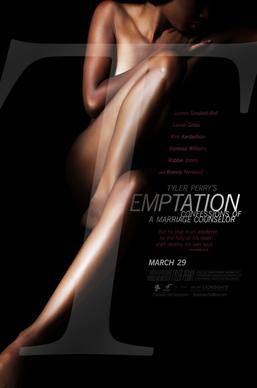 Temptation: Confessions of a Marriage Counselor is the thirteenth film by Tyler Perry.  It is both the most financially successful film in which Perry did not act and is also his highest-grossing drama at the box office.  Although it is not Perry’s best drama (which I still think For Colored Girls is), Tyler Perry’s Temptation is a powerful film.

The film opens as a marriage counselor works with a young married couple having serious problems.  After the husband stalks off, the marriage counselor tells the young wife, Lisa (Andrea Moore), a story about a young woman named Judith (Jurnee Smollett-Bell).  In her mid-20s, Judith is married to Brice (Lance Gross), whom she has known for almost two decades.  They live in Washington D.C., where Brice works as a pharmacist.  Judith works for Wise Counsel, a matchmaking agency owned by the flamboyant Janice Wise (Vanessa Williams).  Judith is unsatisfied at this job, as she wants to open her own marriage counseling company, but has to wait.

Judith meets Harley Madison (Robbie Jones), a young tech billionaire who started a social networking site called, Class-Meet.  Harley wants to invest in Wise Counsel, and Janice picks Judith to work with Harley in order to help him understand the agency.  Harley turns out to be more interested in Judith, and begins to tempt her with the things his wealth and influence can give her – if she submits to his sexual advances.  This temptation, however, could change Judith’s life forever, in ways she does not expect.

The usual melodrama and soap opera theatrics that we have come to expect of Tyler Perry’s films are in evidence in Tyler Perry’s Temptation.  The religious moralizing is also in play, but this time the emphasis is on religious symbolism and metaphors.  I won’t go into detail, as that would spoil some surprises.  One religious element that is forced comes in the form of Judith’s mother, Reverend Sarah Ogalvee (Ella Joyce).  The reverend seems more comical (hilarious, even) than sanctified or spiritual (which does occur in some scenes).

Tyler Perry’s Temptation works because Perry digs deeply into the pursuit of satisfaction as a theme – from personal, such as individual and marital satisfaction, to professional, such as career goals and material wealth.  Perry is not so stupid and heavy-handed as to say that dissatisfaction leads to temptation in search of satisfaction.  Perry suggests, as least it seems that way to me – that temptation is the easy and simply thing.  Being tempted is fun and feels good.  Acting on that temptation is where the problems come in because getting what you want or thought you wanted does not mean you will be satisfied or happy.

Also, seduction can be magical, but the actual consummation, sexual intercourse, or affair might not be quite what you thought it would be.  In the film, notions of satisfaction and seduction lead to the idea that people change, sometimes often.  So in this movie, change becomes something like a specter, dark and ominous, threatening marriages, friendships, professional relationships, family, etc.

One controversial element in Tyler Perry’s Temptation that got a lot of people talking when the film was in production was Perry’s move to cast reality television star and tabloid celebrity, Kim Kardashian, in the film.  Here, Kardashian isn’t bad, although she isn’t much of an actress.  Her character, Ava, Judith’s co-worker and apparent friend, is not really important to the overall story.  In fact, just about any other professional actress or actor could have played that part.  Yes, Kardashian is stunt casting, but she doesn’t hurt the movie at all.

Temptation: Confessions of a Marriage Counselor proves that Perry is capable of creating dramatic films – even though the ending here seems a bit much.  While I think that this is, at best, an above-average movie, it proves that Perry is getting closer to dealing with weighty material and serious subject matter in an earnest fashion, without melodrama… or at least with less.

Posted by Leroy Douresseaux at 11:20 AM