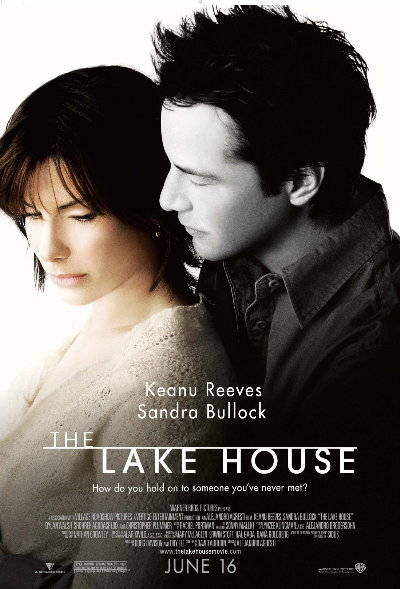 The subject of this movie review is The Lake House, a 2006 fantasy romance movie starring Keanu Reeves and Sandra Bullock.  In the film, a lonely doctor, who lives in 2006, begins a time-spanning romance with a frustrated architect, who lives in 2004, by exchanging letters through the mailbox at an unusual lakeside home.

Improbable and peculiar it may be, but The Lake House is the kind of romantic movie that deserves to have the adjective, “magical” describe it.  Having an enchanted mailbox bring the film’s lovers together is strange.  Never mind that the movie’s time travel hook is illogical, and ignore that the two leads communicate in a way that even the film admits is impossible.  This is about love.  Based upon the Korean film, Siworae (Il Mare is its international title.), The Lake House is an old-fashioned tale of star-crossed lovers who, like Romeo and Juliet, romance against all odds – even against the laws of science.

After moving away from her peaceful lakeside home – a glass house built on stilts over a lake north of Chicago, a lonely physician, Dr. Kate Forster (Sandra Bullock) mails a letter back to the lake house asking whoever will be the next tenant to forward any of her stray mail to her.  It is a winter morning in 2006.  That next tenant seems to be a frustrated architect, Alex Wyler (Keanu Reeves), who is confused that someone claims to have lived in the lake house before him since he is the first person to ever live in it.  After several more letters back and forth, Kate, on a lark, asks Alex, “What day is it there?”  Alex responds, April 14, 2004.

They discover that they occupy the lake house, but two years apart – Alex in the past and Kate in the present.  The mailbox at the lake house allows them to communicate across two years difference in time.  Now, they must unravel the mysteries of this wrinkle in time that allows their extraordinary romance to live before its too late, but if they meet and try to join their separate worlds, they may lose each other forever.

The acting isn’t great, and sometimes it’s, at best, lamely professional.  Reeves, best known for his stiff speaking style, spends much of the film looking pained, as if constantly on cue from director Alejandro Agresti (an Argentinean known for his film, Valentin).  Bullock’s contribution is to spend the film looking forlorn, lonely, or winsome.  Still, the two are movie stars, and they know how to work the camera, which loves them and makes them look good on the big screen.

Over a decade ago, Reeves and Bullock were a hot screen pair in the hit action film, Speed, an edge-of-your-seat thriller that appealed to the adrenaline junkie in moviegoers.  Back then, many of us ignored any of Speed’s flaws in logic because we had a good time watching it.  This time, with The Lake House, Reeves and Bullock try to get us to ignore logic again.  If the viewer responds favorably to that fundamental romantic impulse – our love affair with the love story, we’ll ignore how things about this film nag us and enjoy the romance.


Posted by Leroy Douresseaux at 7:27 AM