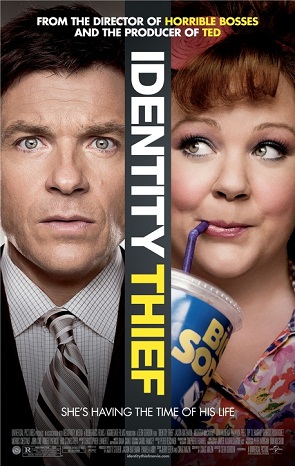 Identity Thief is a 2013 crime comedy from director Seth Gordon (Horrible Bosses).  Starring Jason Bateman and Melissa McCarthy, the film follows a mild-mannered businessman who sets out to confront the woman who has been living it up after stealing his identity.

Accountant and family man, Sandy Bigelow Patterson (Jason Bateman), finds himself arrested for an assault that occurred in Winter Park, Florida.  The problem is that Sandy lives in Denver, Colorado and has never been to Winter Park.  After his new boss informs him that his credit score is getting him fired from his new job, Sandy learns that he is the victim of identity theft.

Traveling to Florida, Sandy confronts the other Sandy Patterson, a portly woman named Diana (Melissa McCarthy), who is having the time of her life with his credit.  By hook and crook, the real Sandy manages to convince Diana to return with him to Denver to help him clear his name.  Diana plans on using any means necessary to escape, but Sandy isn’t the only one after her.  A skiptracer (Robert Patrick) is after Diana for a substantial bounty, and an imprisoned crime boss has sent two of his hired guns, Marisol (Genesis Rodriguez) and Julian (Tip “T.I.” Harris), to kill her.

Comedies from big studios tend to follow a formula that I first noticed in 2003’s Old School.  The lead characters, especially the men, act like over-grown boys for most of the film.  Then, the filmmakers spend the second half of the movie turning these guys that we love to watch being dicks into “dads” or other responsible White male types.

In Identity Thief, the bad boy White guy is actually a woman of many names, whom we come to know as “Diana.”  As played by Melissa McCarthy, Diana is not like the frat-pack, stuck-in-adolescence types that headline such films as Anchorman: The Legend of Ron Burgundy and Wedding Crashers, to name a few.  Diana is practically too complicated to be in a studio comedy.  This character has issues.  Diana is scarred, but bent, not broken.  She has a rat-like determination to survive, and she’s adopted so many guises and told so many lies that you wonder when she’s telling truth.  Who is the real Diana?

Diana is not a criminal with a heart of gold.  She simply is good at beating the system, and, as the ultimate bull-shitter, she can separate the honest from the dishonest and truth from lies.  For the do-as-I-say-not-as-I-do crowd, she is the worst nightmare: someone who can spot hypocrisy in all its guises.

Identity Thief’s plot and story, however, simply do not live up to Diana’s complexities.  She’s intricate, while the plot is a by-the-numbers crime comedy that takes the easy way out of the obstacles placed before Sandy Patterson and Diana.  Identity Thief is not a bad movie, because the lead actors and their corresponding characters are witty, engaging, full of intricacies, and damn funny.  They make Identity Thief a really good movie.

I don’t want to forget Jason Bateman.  He has perfected his spin on the genial good guy and the universal everyman in the television series, “Arrested Development,” and in movies like Hancock and Horrible Bosses.  Sandy Patterson is a familiar character, but Bateman offers layers and subtexts that make the character three-dimensional – one certainly more complicated than this movie’s plot and the ending deserve.  Bateman and McCarthy are so good that they make the holes in this movie take a backseat to their characters.  Identity Thief is an evergreen film because of their performances, and their characters are the reason that this movie will be worth watching a decade from now.