Bruce Willis and Mos Def a Good Pairing in "16 Blocks" 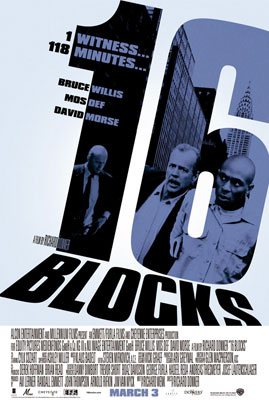 The subject of this movie review is 16 Blocks, a 2006 crime thriller from director Richard Donner.  The film stars Bruce Willis and Mos Def in the story of an aging cop escorting a fast-talking witness from police custody to a courthouse, while unknown forces try to stop them from making it to the courthouse.

Aging and alcoholic New York City detective, Jack Mosley (Bruce Willis), finds himself stuck with the task of escorting loquacious prosecution witness, Eddie Bunker (Mos Def), from police custody to a nearby courthouse.  However, the 16 block trek becomes perilous when a gang of corrupt cops, led by Mosley’s former partner, Frank Nugent (David Morse), attempt to kill the talkative Bunker.  With less than two hours to get Bunker before a jury, Mosley takes on the power of the police force in a small war that might find Mosley and Bunker dead before they get to their destination.

Director Richard Donner has had one of the longest and most versatile careers as a Hollywood filmmaker.  Working in television and film as both a producer and director, he helmed episodes of such TV series as “The Twilight Zone,” “Gilligan’s Island,” and “The Wild Wild West.”  He’s directed such films as The Omen (1976), Superman (1978), all four movies in the Lethal Weapon franchise, and the recent underrated sci-fi flick, Timeline.  Because of this I shouldn’t be surprised that his recent corrupt cop crime drama, 16 Blocks, is so good, but I am.  This film reveals what a fine director can do – take all the elements that go into making a movie and shape them into a quality flick without one element dominating the others.  A great director doesn’t even need all the ingredients to be the best available to turn them into a good movie.

16 Blocks isn’t Bruce Willis’ best performance, but he creates an off-beat cop that’s hard to read and that makes Jack Mosley intriguing.  The viewer might not necessarily know where the guy is coming from or where he’s going, but we know that he fits the part in the film.  Mosley is doing a job he doesn’t want to do, and that’s a perfect setup for a film in which the lead undergoes the heroic change.  Willis gives a lot of the performance in his demeanor and how he carries himself.  He doesn’t need to say a lot or make speeches, but a great physical actor, he can reveal the character in body language as much as he can with dialogue or facial expressions.

Mos Def continues to prove himself an actor, breaking away from the rapper/actor label.  In fact, he’s way better as an actor than he is as a rapper (and with his inimitable style, he is good at that).  With a robust whine in his voice, Mos creates an Eddie Bunker who gives 16 Blocks a distinctive New York flavor.  David Morse is also robustly menacing as the vile and bullying corrupt detective, Frank Nugent, another particular New York touch.

While getting solid performances from his leads and supporting players, Donner brings it all together in a taught thriller that truly brings one to the edge of his seat.  It’s not that the concept behind 16 Blocks in new.  It’s that everyone involved was determined to make a gritty urban drama with the explosiveness of an action thriller, and that determination shows in a high-quality end product.  16 Blocks is a heart stopper and a thrill ride.

Posted by Leroy Douresseaux at 7:20 AM