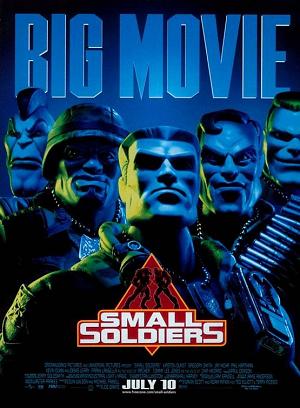 The subject of this movie review is Small Soldiers, a 1998 science fiction, fantasy, and action film from director Joe Dante.  The film depicts a small war between two groups of action figures brought to life by new technology.  Small Soldiers remains one of my all-time favorite films.

Joe Dante directed Gremlins, the tale of toy-like creatures besieging a small town.  He returned to a similar toys-come-to-life theme in the 1998 DreamWorks film, Small Soldiers.  When computer chips manufactured for military use end up in a line of action figures, the toys come to life with minds of their own.  One group, the Commando Elite, is composed of military action figures, kind of like an extreme version of G.I. Joe.  The second group is a collection of monsters and creatures called the Gorgonites.  The Commando Elite, led by Major Chip Hazard (voice of Tommy Lee Jones), are programmed to destroy the Gorgonites, led by the wise Archer (voice of Frank Langella), who are programmed to lose to the Commando Elite.

Alan Abernathy (Gregory Smith) is manning the counter of his father, Stuart’s (Kevin Dunn) old-fashioned toy store, The Inner Child, when he spots a shipment of Commando Elite and Gorgonite toys on a delivery truck.  He convinces the delivery driver to give him a case of each toy set, but he doesn’t know that once he opens the box, he’s also activated the toys, which are actually intelligent because of the military chips in them.  Then, the Commando Elite begin hunting Archer.  When Alan unknowingly takes Archer (who’s hiding in Alan’s bag) home with him, Chip Hazard and the rest of the Elite mark him for annihilation along with the Gorgonites.  Soon Alan’s neighbors, including a classmate to whom he’s attracted, Christy Fimple (Kirsten Dunst), are marked for death as collaborationists with the Gorgonites.  Now, Alan, Christy, both their families, and two developers from the toy manufacturer (Jay Mohr and David Cross) must not only defend themselves from the Commando Elite, they must also stop the toys for good.

The characters in Small Soldiers aren’t that well developed, but they’re more broad archetypes than caricatures.  Gregory Smith’s Alan is the outsider boy, one with a bit of a rebellious streak, and he’s more spirited and strong-willed than his slight build would suggest.  Kirsten Dunst’s Christy Fimple is the all-American girl-next-door who is much wiser and more open minded than her contemporaries.  They make a good screen couple, and Smith and Ms. Dunst act as if they’ve done this before.  Tommy Lee Jones’ voice over performance as Major Chip Hazard is surprisingly good and really sells the film.  His Hazard voice is a mixture of tongue-in-cheek humor, sarcasm, laid-back disdain, and menace.  The rest of the cast fits in well, but really don’t do much until the final act.

Small Soldiers was a moderate box office success.  The film is a bit old for the small children who would play with toys like the Commando Elite and Gorgonites, and would certainly not interest the older teens and twenty-something males who see war action/adventure films.  Still, it’s a good satire of the violent mentality that says we must hate, fight, kill, and destroy those who are supposed to be our enemies or those we were taught or programmed to believe deserve destruction.

The film really is fun (I’ve seen it twice.), and Joe Dante has the knack for never taking his films too seriously.  He can both make his point and make entertaining films with fantastical settings or creatures.  Dante fills Small Soldiers with references to other films that augment the tale he’s telling.  Like his other films, the aforementioned Gremlins and Piranha and The Howling, he takes the ridiculous and gives it humor and bite, and Small Soldiers surely is an edgy little comedy about a small war and the small-minded reasons for fighting it.