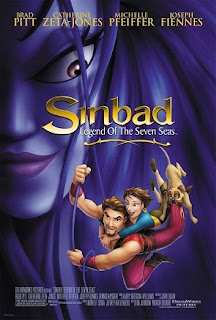 ANIMATION/FANTASY/ADVENTURE/FAMILY with elements of comedy and romance

The subject of this movie review is Sinbad: Legend of the Seven Seas, the 2003 animated swashbuckling fantasy and adventure film from DreamWorks Animation. While this film is technically a Sinbad movie, the character is taken out of its traditional Arabic context and moved to a Greek setting. Sinbad: Legend of the Seven Seas finds the sailor of legend framed by a goddess for the theft of a magical book and forced to save the life of a childhood friend.

Doesn’t Hollywood make great adventure films like Raiders of the Lost Ark anymore, or how about one that’s just good? I suspect that Dreamworks’ Jeffrey Katzenberg was attempting to make a “great” animated adventure film when his company took on the task of creating Sinbad: Legend of the Seven Seas. Visually the film rocks the boat as hard as any other adventure film, but in the end, it lacks the heart of the great American animated films. The film also lacks the show-stopping performances that leave us wanting more, like Raiders did.

Sinbad (Brad Pitt), the Arabian playboy sailor is set to steal The Book of Peace from a galley when he discovers that the book is under the protection of a boyhood friend, Proteus (Joseph Fiennes). Later, a shape-shifting goddess, Eris (Michelle Pfeiffer), makes a deal with Sinbad for him to make another attempt at theft, but she betrays him, steals the book, and frames Sinbad.

The theft is punishable by death, but Proteus offers his life as ransom so that Sinbad will be free to find the book before the date of execution. Proteus believes that only a sea captain of Sinbad’s skill can make the arduous journey across the oceans to retrieve the sacred tome. To make sure that Sinbad keeps his end of the bargain, Proteus’ betrothed Marina (Catherine Zeta-Jones) follows Sinbad and his crew to Eris’s dark kingdom of Tartarus.

Sinbad: Legend of the Seven Seas seems a little lost in the current movie marketplace. It’s a boys adventure animated film, and both Fox (with Titan A.E.) and Disney (with Treasure Planet) have suffered spectacular box office flops with boys oriented animation. Computer animated films like Finding Nemo and Monster’s Inc. appeal to both the kiddies and the adults with their broad humor and tales of families and friendships fighting adversary.

What does Legend of the Seven Seas have going for it? It has striking, traditional cel animation in rich beautiful colors and 3-D computer modeling of spectacular and awe-inspiring cityscapes. The filmmakers use computer animation to create large scale crowd scenes and to unleash some of the most impressive, monstrous creatures you’ll see in animation for a long time. The story is rather simple-minded, but the fast-paced script by John Logan (a co-scriptwriter on Best Picture winner Gladiator) keeps the film story bouncing off the walls like a madly-inspired pulp novel. The score by Harry Gregson-Williams is the kind of stunningly grand and opulent affair usually reserved for serious, live action epics, so it makes Sinbad seem more serious than it is.

The voice acting is mostly bad, and I mean really bad. Brad Pitt is atrocious. Let’s face it, and he needs to be seen as well as heard. He’s a package deal – a good actor with a good face and body. If they aren’t together, all you have is slop. Catherine Zeta-Jones, whose voice I find so distinct, is so nondescript that if not for her name on the marquee, we’d never know who it was. Dennis Haysbert’s sonorous tones are wasted on the hideous dialogue Logan (or whoever rewrote this) gave him. Listening to the film’s stilted dialogue is torture, and in the end, it’s the major misfire that does in this movie.

Most of the time, Sinbad: Legend of the Seven Seas is gorgeous to look at, but with the deep pockets of American film studios, how can animators not at least make an animated film look good? Other than that, there’s nothing to make this film stand out. The story is just so matter-of-fact; even the prize to be obtained, The Book of Peace, lacks resonance. It doesn’t seem important, and the script really isn’t clear on why it should be important; the book might as well have been a gold-encrusted jack-in-the box.

A really good animated film can have a simple story, but it must reach the audience’s (children and adults) hearts and as well as appeal to their minds. Dreamworks certainly has the power to make beautiful animated films of an epic scope, but this is ultimately only a show of force i.e. we (Dreamworks) can compete with Disney. Sinbad: Legend of the Seven Seas simply lacks heart. Finding Nemo’s story of a grieving father’s desperate search for his only child really touched a large number of viewers. A cast of witty and talented voice actors who can keep up the banter and make their characters’ emotions and moods seem real just endears itself to viewers.

For all the thunder and lightening Sinbad: Legend of the Seven Seas has, it’s mostly a disposable adventure film. It is certainly an entertaining adventure film, but there’s nothing to make it stand out. I don’t think kids are going to buy it because there’s nothing in the film to endear them to it. Lovers of adventures films will have a good time, but they’ll almost certainly forget Sinbad: Legend of the Seven Seas, if not by the time they walk out the theatre, then certainly by the time they reach the first stop light.

Posted by Leroy Douresseaux at 6:46 AM