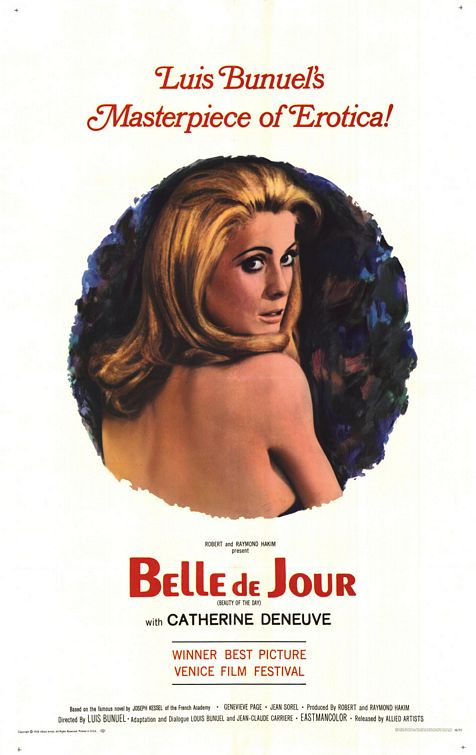 The subject of this movie review is Belle de jour, a 1967 film from director Luis Buñuel.  A co-production of France and Italy, this film is based on the 1928 novel, Belle de jour, written by French journalist and novelist, Joseph Kessel.  The film focuses on a sexually frigid young housewife who decides (or is compelled) to spend her midweek afternoons working as a prostitute.

Some may find Belle de jour’s eroticism dry.  Director Luis Bunuel (The Discreet Charm of the Bourgeoisie) shows Severine’s fantasies to us as surrealistic plays, and Bunuel is considered the father of cinematic surrealism.  It’s an interesting method in that it forces us to pay close attention to the film, mostly in the hopes that we might catch a flashing image of Ms. Deneuve’s beautiful flesh, anything to satisfy our desires to possess Severine.  Certainly, Belle de jour doesn’t blind us with the blunt images of raw sexuality early 21st audiences have not only come to expect in their movies, but often demand.  Bunuel and his screenwriting partner Jean-Claude Carriere fashioned the story so that we can truly understand Severine’s sexual frustrations.  She’s obsessed with being satisfied, and she driven to find ways to satisfy herself, and in a cathartic fashion we become anxious that she find satisfaction.

In the hands of a lesser talent, this movie would bore us to tears, but Ms. Deneuve encompasses her character’s unrequited lusts.  While her character can’t be physically intimate with her husband, Ms. Deneuve’s performance is spiritually intimate with her audience.  She takes us in and makes us part of her; we feel everything she feels, desires what she seeks, and feel all the danger, confusion, and strangeness her job as a prostitute create in her.  Ms. Deneuve makes Severine more than just a character; Severine is our adventure into the border world between real, physical sex and surrealistic and fantastic longing.

Bunuel creates a film that has a rich and vivid dream world, one that is both undeniably real and suddenly ethereal.  He makes Severine’s escapades through the myriad worlds of lust and longing an adventure as interesting as Alice’s through Wonderland.  It’s a strange film; sometimes, I couldn’t help but wonder what was happening.  I was confused when some of Severine’s fantasies went from episodes of titillation to scenes of harsh punishment.  Belle de jour both frustrated and intrigued me.  I won’t call the film perfect, but it’s certainly an enjoyable example of how powerful and confusing film images can be.  Like a dream, a movie sometimes has a way of not giving you what you saw and thought you were getting.  Both a movie and a dream can stay with you even when you’re unsatisfied them.  You wonder about them and dry to decipher them.  Any movie that can be so like a dream deserves to be seen.