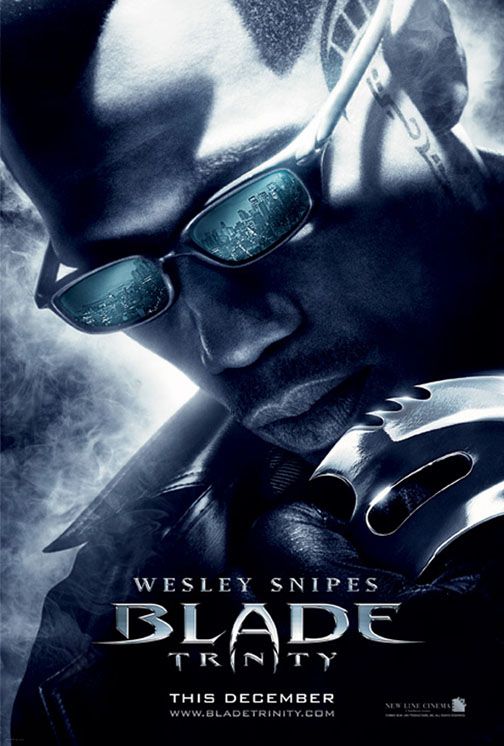 The subject of this movie review is Blade: Trinity, a 2004 vampire horror and superhero action movie from writer-director David S. Goyer.  It is the third and final movie in the Blade film series produced by New Line Cinema.  Blade: Trinity finds Blade a wanted man by the FBI and forced to unite with a band of vampire hunters called the Nightstalkers in order to battle his most challenging opponent ever, Dracula.

Early in Blade: Trinity, a group of vampires by led nasty girl vamp princess, Danica Talos (Parker Posey), awakens the original vampire, Dracula (Dominic Purcell), who is buried deep within a pyramid in Iraq.  Apparently, the vampires are desperate to rid themselves of their mortal enemy, the vampire hunter, Blade (Wesley Snipes), aka the Daywalker, and hope Dracula, who goes by the name Drake, will defeat Blade.  Meanwhile, Danica and her crew have also set Blade up so that he mistakenly kills a human he thinks is a vampire.  The murder sets the corrupt police and media against him.  The FBI track Blade to his new lair and launch an attack.  During the strike, Blade’s mentor, father figure, and weapons creator, Abraham Whistler (Kris Kristofferson), is killed, and the FBI captures Blade.

Enter The Nightstalkers, a group of human vampire hunters, Blade never knew existed.  One of them is Abigail Whistler (Jessica Biel), Abraham Whistler’s out-of-wedlock daughter, and she is an ass-kicking, bow-hunting babe who doesn’t flinch from going toe to toe with bloodsuckers.  Add a third partner to Blade and Abigail, and you have a trinity.  The third player is the buff, wise-cracking Hannibal King (Ryan Reynolds), who was once turned into a vampire, and later cured by Abigail.  Together, the trio must hunt down Drake and his vampire cabal and stop them from implementing the vampire final solution against humanity.

Blade: Trinity is the least in terms of quality of the three Blade films, but it still manages to be a thrill (sometimes).  Writer/director David S. Goyer (who also wrote the screenplays for the previous Blade films) and cinematographer Gabriel Beristain (who also shot Blade II) were also determined to make this film look different from the previous two.  Blade: Trinity looks like an extended music video, but the photography has the crystal clear quality of digital video, so much so that the film looks like a television program shot in high definition.  Goyer also dropped a lot of the muddy and murky CGI that didn’t always work in Blade II.

It’s the performances that really hamper Blade: Trinity; in fact, it wouldn’t be too mean to say that the acting is atrocious.  Wesley Snipes always played Blade as stoic, with little to say except for a few lines delivered in a thuggish monotone.  However, Snipes is often too stiff, here.  He’s is too “in character,” and that keeps Blade from interacting with the other characters.  Granted Blade is a loner, but he goes overboard this time.  There are huge segments in this film in which he hardly utters more than a few grumbles.  Thankfully, towards the end of the film, he does come to life as a badass delivering the kind of lines that would fit right into a blaxtiploitation or Quentin Tarantino movie.

Ryan Reynolds really tries to liven up this film as Hannibal King, but rarely is anybody up to his challenge.  His lines are always funny, but often fall flat or are lost in the moroseness of the rest of the cast.  Jessica Biel is almost undead herself in this film, but she’s fine and pretty and moves well; that saves her performance (a little).  Parker Posey is miscast and is made up to look like an ugly, pasty-white trash, hag vampire.  Though she has a (very) few moments, she’s simply annoying.  If Dominic Purcell gets anything out of this film, it’s that he’s one of the worst and least intriguing Dracula’s in cinema history; that would include Dracula’s that have appeared in Scooby-Doo cartoons and other Hanna-Barbera animated programs.

The stiff (non) acting is what makes Blade: Trinity seem so listless and clunky for about half the film’s running time – that and the fact that the vampires spend most of the time brooding and hiding in their tacky skyscraper/palace.  Blade: Trinity is as much a hunt as it is a waiting game, but the waiting is the hardest part.  The film is pretty to look at, and the film score (co-written by The RZA of The Wu-Tang Clan who also co-wrote music for Tarantino’s Kill Bill films) and soundtrack are killer.  But for all the credit I give Goyer, the film’s plot is… dumb and stretched thin, and falls apart to almost nonexistence.  At times, the film is lethargic and meanders, playing a waiting game until the final act.  Though I love Blade, even I have to admit that unless you’re a fan of the series, you can catch this one when it’s on home video.