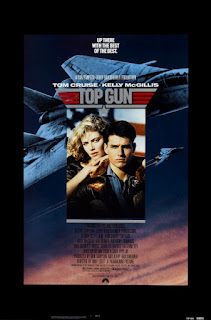 Top Gun is a 1986 action and drama film directed by Tony Scott and starring Tom Cruise.  The film was inspired by an article entitled, “Top Guns,” which was written by Ehud Yonay and published in the May 1983 issue of California Magazine.  Top Gun the film focuses on a daring young U.S. Navy pilot who is a student at an elite fighter weapons school where he competes with other students and learns a few things from a female instructor.

Top Gun opens on the Indian Ocean aboard the vessel, the “USS Enterprise.”  The story introduces United States Naval Aviator, Lieutenant Pete “Maverick” Mitchell (Tom Cruise), and his RIO (Radar Intercept Officer), Lieutenant Junior Grade Nick “Goose” Bradshaw (Anthony Edwards).  While on a mission flying their fighter aircraft, Maverick and Goose have an encounter with a hostile aircraft.  As a result of the incident, Maverick and Goose are invited to the U.S. Navy “Fighter Weapons School” in Miramar, California (also known as “Fightertown U.S.A.”).  The top one percent of naval aviators (pilots) get to attend Fighter Weapons School, also known as “Top Gun” (or “TOPGUN”).

Will Maverick earn the Top Gun trophy?  Or will his reckless ways and tendency to disobey orders endanger those around him and cost him his future.

Until recently, I had never watched Top Gun, not even a minute of it.  From the first time I saw a trailer for it, I thought Top Gun looked stupid, although I was a Tom Cruise fan at the time of its release (as I still am).  I only recently watched it in preparation for seeing the long-awaited sequel, Tom Gun: Maverick, which has a good looking trailer and has received glowing early reviews.

But I was right.  Top Gun is stupid.  It is poorly written, especially on the character drama end.  Writers Jim Cash & Jack Epps Jr. are credited as the film's screenwriters.  The film's credited “Associate Producer,” the late Warren Skarren (1946-90), was a screenwriter known for rewriting the screenplays of big Hollywood projects (such as Beetlejuice and the 1989 Batman film).  Skarren apparently did some heavy rewriting for Top Gun's shooting script.  However, the film seems to be made from the parts of several screenplays that were combined to form a new script.  That especially shows during the character drama scenes, which are sometimes awkward, sometimes nonsensical, sometimes inauthentic, and sometimes all three at the same time.

To me, the film looks poorly edited (which was Oscar-nominated), once again, mainly on the drama scenes.  The film's musical score, composed by Harold Faltermeyer, is mostly atrocious.

However, the flight action sequences and the aerial stunts are quite good.  When the film is in the air with those fighter jets or when Maverick is riding his motorcycle, Top Gun can be entertaining and invigorating.  The drama is just so bad that it makes me forget the film's good stuff.

In 2015, Top Gun was added to the “National Film Registry” because it was considered “culturally, historically, or aesthetically significant.”  For me, the only reason that would be true is because of its lead actor, Tom Cruise.  I think Top Gun is the film that made  Cruise a celluloid god.  He became his generation's biggest movie star and remains so.  Top Gun began a decade (1986-96) that gave us “peak” Tom Cruise.  Yes, he is still in his prime, but that was the decade that saw him give his most acclaimed and memorable performances, and in 1996, he began his most successful film franchise with the first Mission: Impossible.  Yes, Cruise has given other memorable and acclaimed performances, but never so many as in that time period of 1986 to 1996.

So Top Gun is significant because of Tom Cruise.  He is so handsome and fresh-faced here, and his youth, dynamism, and screen presence save this thoroughly mediocre film.  Even with the great action sequences, this film would have been at best a cult film had any actor or movie star other than Tom Cruise been the lead.

Yeah, I could talk about the other actors who were in Top Gun, but what they did could not rise above the mediocrity of this film's drama – both in screenwriting and in directing.  Tom Cruise – in a fighter or on a motorcycle – is Top Gun.  As much as I am a fan of his, however, I wouldn't watch this shit again.  But yes, I will see Top Gun: Maverick.

Posted by Leroy Douresseaux at 11:13 AM