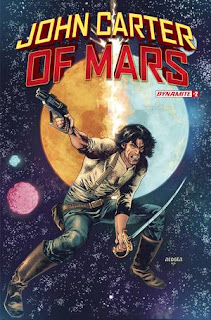 John Carter of Mars Volume 1 #2 opens on Barsoom.  Humans and their motor vehicles are being hurled down to the planet, and the humans are desperate.  Luckily Dejah Thoris, Princess of Barsoom is there to answer desperate pleas.

Meanwhile, John Carter continues his boogie-woogie with the Green Martians.  Lieutenant Fred Hines will fight with Carter in order to find his own missing wife, Thai, who is now on Barsoom.  But can Fred and his partner, Charlie, help a princess find her husband?

THE LOWDOWN:  In July 2021, Dynamite Entertainment's marketing department began providing me with PDF review copies of some of their titles.  One of them is John Carter of Mars Volume 1 #2.  It is the second solo Dynamite John Carter comic book that I have read.

Writer Chuck Brown created in John Carter of Mars #1 the kind of comic book that I could not stop reading.  I couldn't stop reading John Carter of Mars #2.  What a blast!  This series may be the freshest take on John Carter, if not ever, then, in a long time.  Brown simultaneously reinvents Burroughs influential series and revitalizes it with fast-paced cross-planet action.  He balances the action energy with strong characters, making each chapter a great read.  There are, of course, some interesting new characters that hopefully will play a larger part in the narrative.

George Kambadais's art and coloring remind me of the work of Bruce Timm and of the graphic design of the Cartoon Network series, “Samurai Jack.”  Kambadais' compositions contain an energy that seems to bounce off the walls of the panels like a careening ball of fire.  He super-charges Brown's script and transforms it into powerful and attention-grabbing storytelling.  This is also a new look for the John Carter property, and I welcome that freshness.

I hope that these first two issues are not flukes.  After only two issues, I am highly recommending John Carter of Mars.