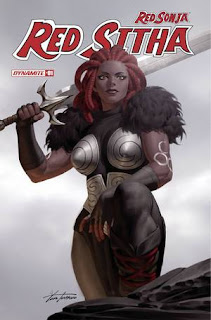 Now, Sitha is “Sitha the Red,” and she is the star of her own comic book series, Red Sitha.  It is written by Andolfo and Luca Blengino; drawn by Valentina Pinti; colored by Chiara Di Francia; and lettered by Jeff Eckleberry.  The series focuses on Sitha the Red, the adopted daughter of Red Sonja, now a decade older and a bounty hunter in the Kingdom of Aquilonia.  That is until someone from her past involves her in a suicide mission.

Red Sitha #1 opens in Tarantia, the capital of the Aquilonia.  Sitha the Red is searching for Misty, a missing girl thought to have run off for an elopement.  Instead, Sitha's search has caused her to interrupt “the Ritual of the Opening Doors.”  Will Sitha be able to return the girl to Massentia, or will her life end in this temple...?

Later, Sitha receives a shocking message and returns to Massentia – after having a great sea adventure on the way back.  When Sitha finally meets the messenger, his identity is even more shocking than the message he sent.

THE LOWDOWN:   In July 2021, Dynamite Entertainment's marketing department began providing me with PDF review copies of some of their titles.  One of them is Red Sitha #1.

As much as I like Mirka Andolfo and Luca Blengino's work on Red Sonja Volume 6, I like Red Sitha #1 even more.  I hope this delightful first issue is not a fluke.  It is closer to The Princess Bride than it is to any issue of Red Sonja.  Artist Valentina Pinti captures the script's humor and blends it seamlessly into the world of sword and sorcery.  Chiara Di Francia's bright colors strike the right mood for each scenes, from a darkened temple to a surreal sea adventure.

Let's hope upcoming issues of Red Sitha are as good as this first issue, which I highly recommend to you, dear readers.  I would be surprised if you didn't enjoy following the adventures of the witty and self-effacing Sitha the Red.

Posted by Leroy Douresseaux at 2:22 PM