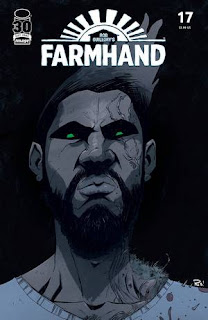 Set in and around Freetown, Louisiana, Farmhand focuses on the Jenkins family: Ezekiel “Zeke” Jenkins; his wife, Mae; their children, Abigail and Riley; Zeke's father, Jedidiah “Jed” Jenkins; and sister, Andrea (“Andy”).  Once upon a time, “Jenkins Family Farmaceutical Institute” used stem cell biotechnology to grow plant-based replacement human organs and tissue.  Once upon a time, transplant recipients saw this as a miracle.  Now, Zeke and the rest of the world see the miracle as a curse.

Farmhand #17 (“The Bridge”) opens with a wish it was once upon a time – a vision of what could have been.  But this is the world of the Jedidiah transgenic seed...  In this real world, Zeke and the family are living the trailer park life, and Zeke is feeling the full 12-year-old rage of his daughter, Abigail.  These are all the complications of a plague begun by his father's “science.”

At the institute, Zeke has to hear crazy theories from Walter Sparrow.  But the crazier words come from old Joe Thibodeaux, a man to whom Zeke gives a ride home.  By the end of the ride, Zeke will know some crazy shit – all of it about himself.

THE LOWDOWN:  In the two years since the publication of Farmhand #15, Rob Guillory may have used that time to really think about Farmhand.  Already a tight concept, it has returned, crazier and more inventive than ever.  Farmhand #16 revealed just how far off the moss-ridden rails this series had gone.  Readers were introduced to a world not ready for the post-apocalypse – not when the apocalypse, so green and pretty, was still happening.

Farmhand #17 reveals that even Guillory's collaborators are on that wacky weed.  Colorist Jean-Francois Beaulieu turns the colors of Farmhand nightmarish for Zeke's mind-numbing dreams and visions.  Then, he flushes the daytime world or “reality” in neon and dayglo-inspired inebriation.  With his lettering, Kody Chamberlain impossibly creates a volume for Farmhand – a mixture of fonts both ordinary and demonic.  In a way, Chamberlain is pumping up the volume to cacophony – all the better to “hear” the lunacy of this series.

With Farmhand, there is practically a surprise on every page.  Rob Guillory is pruning our expectations because it is actually a good thing not to know what to expect from your favorite comic books.

I READS YOU RECOMMENDS:  Fans of dark fantasy fiction and of great comic books will want to be a Farmhand.

Posted by Leroy Douresseaux at 10:46 AM