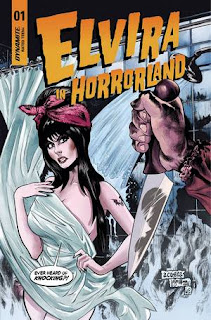 Elvira also appeared in comic books, beginning in 1986 with the short-lived series from DC Comics, Elvira's House of Mystery.  In 2018, Elvira returned to comic books via Dynamite Entertainment.  Elvira's latest comic book series is Elvira in Horrorland Volume 1.  The series is written by David Avallone; drawn by Silvia Califano; colored by Walter Pereyra; and lettered by Taylor Esposito.  The series finds Elvira trapped in the Multiverse of Movies.

Elvira in Horrorland Volume 1 #1 (“Bloch Party”) opens in the aftermath of Elvira's adventures with the ghost of the late, great film legend, Vincent Price (see Elvira Meets Vincent Price).  Part of those adventures included the discover that all movies create their own little “pocket dimensions.”

Now, Elvira finds herself in the pocket dimension belonging to one of the most famous horror films of all time, directed by one of the most influential and greatest filmmakers of all time.  That should be wonderful for Elvira, except that the movie includes an infamous and famous brutal murder in a shower.  To return to her own world, Elvira just has to find a “magical remote control” (Hello, Pleasantville), but can she really let things play out in this pocket dimension the way they are supposed to?  Well, there wouldn't be an entire comic book if she didn't.

THE LOWDOWN:  In July 2021, Dynamite Entertainment's marketing department began providing me with PDF review copies of some of their titles.  One of them is Elvira in Horrorland Volume #1, one of many Dynamite Elvira comic books that I have read and enjoyed.

By now, anyone who is a regular reader of my comic book reviews know that I adore Elvira comic books written by David Avallone and published by Dynamite Entertainment.  So, it is best just to move on, although I should note that I was surprised to see David make an extended reference to the notorious and pointless remake of the film that Elvira visits this issue.

Artist Silvia Califano superbly captures the spirit of this “pocket dimension” and conveys a sense of humor that I think only the best MAD Magazine satirists and parody masters could pull off.  Califano's art even resembles Howard Chaykin's peak art from the 1980s, especially the 1986 miniseries now known as The Shadow: Blood and Judgment.  Califano's sense of style and mood are superb, with the storytelling really having a sense of movement.

Taylor Esposito's lettering stabilizes the storytelling, bring order to the madcap, and colorist Walter Pereya certainly adds a jarring note at the right time.  Of course, I expected this creative team to pull this off.  Of course, I expected Elvira in Horrorland #1 to be good.  Now, I expect you to go out and buy it and other Avallone Elvira productions.