Comics Review: NIGHT OF THE GHOUL #6 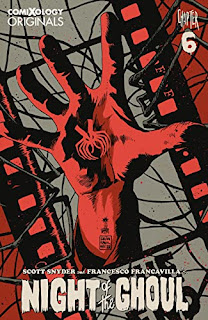 NIGHT OF THE GHOUL #6 (OF 6)
comiXology/Best Jacket Press

Night of the Ghoul is a six-issue, digital comic book miniseries created by writer Scott Snyder and artist Francesco Francavilla.  It is published by comiXology as part of its “comiXology Originals” line of digital comics.  This six-issue series will later be collected in trade paperback form by Dark Horse Comics.  Night of the Ghoul focuses on the dark conspiracy behind a lost horror film from 1936.

Night of the Ghoul starts at an old folks home deep in the desert.  Accompanied by his son, Orson, film fanatic, Forest Innman, is there to meet one of the residents, Charles Patrick, who is really T.F. Merritt, a screenwriter and film director from the Golden Age of Hollywood.  In 1936, Merritt shot a a cursed horror film, “Night of the Ghoul,” that never made it to the silver screen.  A mysterious studio fire destroyed the footage and killed the cast and crew at the wrap-party.  The film became a legend, but no footage was ever recovered … until Forest finds some.  And the trouble begins.

Night of the Ghoul #6 opens as Forest and Merritt arrive at Panama Studios.  Almost nine decades ago, it was the sight of an infamous fire.  Now, Merritt is determined for Forest to see the end of “Night of the Ghoul.”  Meanwhile, Forest's son, Orson, has uncovered some shocking information, but can he get it to his father on time?

Forest is seeing the film as he never knew it was, and Merritt wants him to see it all.  Plus, the Ghoul is ready to make his long-awaited appearance.

THE LOWDOWN:  In Night of the Ghoul, Francavilla and Snyder have created a masterpiece of atmospheric horror.  Every chapter is great, but the fifth chapter felt like writer Scott Snyder was padding the series so that the series would reach its required six chapter/issues.

Now, comes Chapter Six, and though it is welcomed, it is predictable or meta – depending on your point of view.  I think it is a little of both.  It is predictable in its outcome and meta in that Forest shares the fate of fictional (maybe) character from earlier in the narrative.  Still, there is all that lovely Francavilla art.  The ending sets up a sequel, and if you have been reading the series, why not finish it?  As much as I like Night of the Ghoul, I feel it started better than it ended.  Perhaps, the joy in this series is in the journey not in the destination...

Posted by Leroy Douresseaux at 2:51 AM