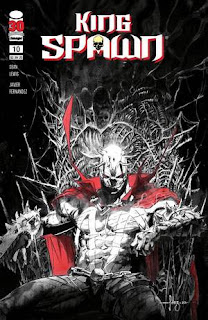 King Spawn is one of three recently launched comic book series that join the original series to form the “Spawn Universe.”  This series is written by Sean Lewis with Todd McFarlane; drawn by Javi Fernandez; colored by FCO Plascencia; lettered by Andworld Design.  King Spawn finds Spawn battling the members of a dark conspiracy that wants to force him to accept his crown.

King Spawn #10 opens on the streets of New York City.  While Spawn is in Greenworld, sparring with Gaia and receiving grave prophecies and warnings, his best friend, Terry Fitzgerald, is about to enter the Exodus Foundation building.  Exodus is resource central for all the major players in the “King Spawn” movement:  Psalms 137, the Court of Priests, and Black Azrael.

THE LOWDOWN:  King Spawn continues to be the best Spawn spin-off comic book to date.  This hybrid of dark fantasy, the supernatural, and superheroes never disappoints.  It either whets my appetite for destruction or blows my mind.

King Spawn #10 may be the best issue yet, and I want to call it my favorite issue (although I know other favorites are just around the corner).  The art is presented in the three-color format: black, white, and red.  I've always thought that the best artists really show off their chops in black and white, and in King Spawn #10, Javi Fernandez certainly reveals his command of mood, atmosphere, and settings  His art is gorgeous – like a mixture of Eduardo Risso's best work from 100 Bullets (DC Comics) and Moonshine (Image Comics).  King Spawn #10 is crime comics cool meets monster comics kick-ass.

King Spawn #10 is one of those issues in which writer Sean Lewis sprinkles bits from all his craziness so far, but done in a way that thrills regular readers and acts as a “roach motel” for new readers.  And it is indeed a thrill to read.  Get King Spawn.

Posted by Leroy Douresseaux at 4:02 AM