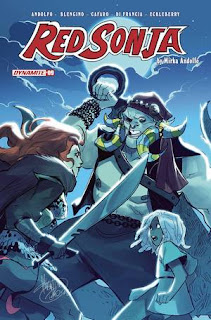 Red Sonja remained a fixture in comic books from then until about 1986.  There have been several ongoing Red Sonja comic book series, and the latest, Red Sonja Volume 6, is under the guidance of popular Italian comic book creator, Mirka Andolfo.  It is written by Andolfo and Luca Blengino; drawn by Giuseppe Cafaro; colored by Chiara Di Francia; and lettered by Hassan Otsmane-Elhaou and Jeff Eckleberry.  In this new series, Red Sonja accepts the bounty to bring a girl named “Sitha” to a broker who will send her to her true home (Kithai).  The girl, however, becomes attached to Sonja and calls her mother and an adventure begins.

Red Sonja Volume 6 #9 opens on the “Sea of Vilayet,” aboard a Shahpur freighter, the “Derketo's Eye,” that is supposed to take Sonja and Sitha to Kithai.  They are betrayed, however, by the ship's captain, Beylab, who is really a slave trader.

Fate brings them salvation when a pirate ship rams the Derketo's Eye.  Now, the slaver is the sight of a battle between Sonja and the formidable Captain Eustachius Krancher … unaware that the Crimson Mists have arrived.

THE LOWDOWN:   In July 2021, Dynamite Entertainment's marketing department began providing me with PDF review copies of some of their titles.  One of them is Red Sonja Volume 6 #9 which is the latest of several Dynamite Entertainment Red Sonja comic books that I have read.  This is also only the eleventh issue of a Mirka Andolfo comic book that I have read.

Andolfo and Luca Blengino have shifted this story into an old-fashioned sword and sorcery adventure, full of magic, mysticism, strange lands, and stranger creatures.  They still manage to focus and sometimes build upon the relationship between Sonja and Sitha, but they don't short readers on the wild action – especially now.

Artist Giuseppe Cafaro captures the shifting settings and rapid changes in a world full of stubborn and persistent magic.  With each issue, he makes this series more his own, capturing the character drama and the sorcery.  This Red Sonja comic book continues to be worth following.