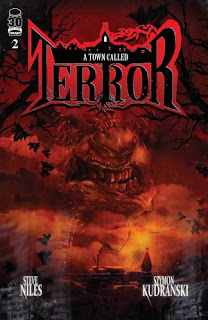 A Town Called Terror is a new comic book series from writer Steve Niles and artist-colorist Szymon Kudranski.  The series blends the genres of crime and horror fiction and is set largely in a town of monsters and freaks.  Letterer Scott O. Brown completes the creative team.

In a town called “Terror” (population 1300), a great man has just come back from the dead – apparently not for the first time.  Henry West has also just been kidnapped to Terror, his hometown.  Meanwhile, his wife, Julie, knows very little of the circumstances surrounding her husband's disappearance, only that her husband has been kidnapped.

A Town Called Terror #2 (“The Return”) opens in a town called Terror.  No, it's not a nightmare, Henry.  You are back into Terror and are locked in.  In a tense meeting with his father, Henry learns that dear old dad has forced his return to Terror because his wife (and Henry's mother) has mysteriously disappeared, and Henry apparently has the skills to find her.

But being home has not only reacquainted Henry with painful memories, but also with old rivalries.

THE LOWDOWN:  Steve Niles may be the most famous writer of modern American horror comic books.  Artist Szymon Kudranski has been plying his trade on the dark side of comics with stints on Marvel Comics' The Punisher and on Spawn and recently on Nita Hawes NIGHTMARE Blog (also from Image Comics).  They have come together for a comic book that could be quite special.

Niles is playing out the story in monthly serial form; for instance, we really don't know what happened to his mother other than the vague “beyond the grave” offering.  While Niles werewolf-cock-teases us, Kudranski is slaying readers with some of the most beautifully haunting and hauntingly beautiful horror comic book art being published today.  [Honestly, it seems that the best artists of horror comic books are currently mostly at Image Comics.]

Here, Kudranski's art and storytelling is truly Film-Noir, not just light noir-ish pretend.  It is as if someone, Kudranski, in this case, took the sublime shadowy worlds of Bernie Wrightson and decided to evolve what the late artist did rather than just be “inspired” by it or “homage” it to death.

The world that Kudranski creates in A Town Called Terror is ... terrifying, but also too beautiful to resist.  If there is ever a film or TV adaptation of this comic book, no cinematographer or director of photography will be able to recreate the visual, graphical, and illustrative beauty that is the art of A Town Called Terror.

Posted by Leroy Douresseaux at 10:54 AM