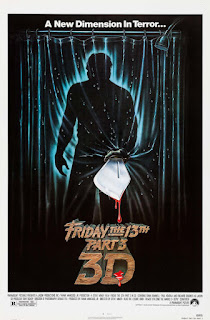 Friday the 13th Part III is set immediately after the events of Part 2.  A young woman, Chris Higgins (Dana Kimmell), and her friends travel to Higgins Haven, her old family home on Crystal Lake, to spend the weekend.  The group includes pregnant Debbie (Tracie Savage); her boyfriend, Andy (Jeffrey Rogers), Shelly (Larry Zerner), a young man who is an incessant prankster; Vera (Catherine Parks), who is supposed to be Shelly's blind date; and finally, stoner couple, Chuck (David Katims) and Chili (Rachel Howard).  Rick (Paul Kratka), Chris' boyfriend, is waiting for them at Higgins Haven.  The group has also attracted the attention of a trio of reprobate punk bikers:  Ali (Nick Savage), Fox (Gloria Charles), and Loco (Kevin O'Brien).

Meanwhile, Jason Voorhees (Richard Brooker) was left injured after his recent murder spree at a nearby counselor training camp.  He has arrived at Higgins Haven, after killing local store owner, Harold (Steve Susskind), and his wife, Edna (Cheri Maugans).  And he is ready to begin a new killing spree.

Between 1981 and 1983, some segments of the American film industry embraced 3D films again.  One of the resulting films was Friday the 13th Part III, which was originally released to theaters as a 3D film ("Friday the 13th Part 3: 3D") almost forty years ago (August 1982).  I doubt anyone younger than 50-years-old ever saw it as a 3D film inside a movie theater.  I didn't, so there is no point in me trying to talk about that aspect of the film.  I can't remember when I first saw Part III, but I think I was well into middle age by the time I did.

Contemporary reviews of Friday the 13th Part III were savage, and in a way, those critics were right.  Part III isn't imaginative in terms of plot.  The film exists to make money because movie audiences enjoyed seeing 20-somethings get killed in the two earlier installments, especially seeing Jason kill in Part 2.  So Part III was inevitable, although at the time, it was apparently meant to be the series finale.

Part III does have one thing going for it.  Most of the characters are interesting.  No two characters are alike, even when they look alike.  In fact, whenever I watch this movie, I find myself sometimes confused by Chris, Debbie, and Vera – especially Chris and Debbie who look, at least, like fraternal twins.  The characters are unique and even quirky, but the narrative really and obviously does not dwell on personality, not when there is killing to be depicted.  Besides, maybe there is no point to really getting to know characters that are going to be dead soon, although Jason does not start killing Chris' friends until after the fifty-minute mark of the film.

Because I like these characters:  Chris and her friends, especially her hunky boyfriend, Rick, I like Friday the 13th Part III … a lot.  I watch it anytime it is shown on some cable network, so I probably see it at least two or three times a year.  Still, I have to admit that there is a dry formality to the killings, and the filmmakers act as if they are making nothing more than the cinematic equivalent of one more fast food toad burger.  And that's a shame, because, in some areas, Friday the 13th Part III had the potential to be better – much better.  My grade and ratings for this film reflect my good feelings towards this classic 1980s slasher film.

Posted by Leroy Douresseaux at 11:45 AM