Review: 1978 Version of "DEATH ON THE NILE" Still Has Some Charms 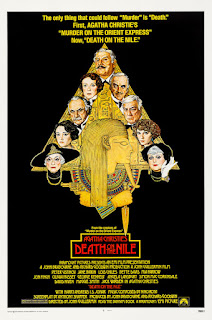 Death on the Nile is a 1978 British mystery film directed by John Guillermin.  It is based on the 1937 novel, Death on the Nile, written by Agatha Christie (1890-1976).  Death on the Nile the movie finds Hercule Poirot investigating the murder of a newlywed heiress, committed during a luxurious cruise.

Death on the Nile finds famous detective Hercule Poirot (Peter Ustinov) embarking on a luxurious cruise on the Nile River in Egypt.  Poirot is delighted to discover that his friend, Colonel Race (David Niven), will also be aboard the Nile paddle steamer, the “S.S. Karnak.”

Also aboard are the newlyweds:  wealthy heiress, Linnet Ridgeway (Lois Chiles), and her husband, Simon Doyle (Simon MacCorkindale).  While in Egypt on their honeymoon, they are being stalked and hounded by Simon's former fiancé, Jacqueline “Jackie” de Bellefort (Mia Farrow), who was also Linnet's close friend.

When Linnet is found shot to death aboard the Karnak, Jackie is the most obvious culprit, but there are others on board who have reason to want Linnet dead.  There is Linnet's maid, Louise Bourget (Jane Birkin), who was bitter due to her mistress' refusal to grant her a promised dowry.  Linnet's shady American attorney and estate trustee, Andrew Pennington (George Kennedy), whom she called “Uncle Andrew,” was stealing from her.  Elderly American socialite, Mrs. van Schuyler (Bette Davis), is a kleptomaniac who wanted to steal Linnet's pearl necklace.  Miss Bowers (Maggie Smith), van Schuyler's nurse, blamed Linnet's father for financially ruining her own father.

Linnet was suing Salome Otterbourne (Angela Lansbury), a brassy romance novelist, for libel regarding a similarity between Linnet and one of the characters in Otterbourne's novel, “Passion Under the Persimmon Tree.”  Meanwhile, Mrs. Otterbourne's daughter, Rosalie (Olivia Hussey), was anxious to protect her mother from financial ruin.  Linnet was also threatening to expose Dr. Ludwig Bessner (Jack Warden), a Swiss psychiatrist faced with exposure because his unorthodox treatments affected one of Linnet's friends.  Finally, Jim Ferguson (Jon Finch) is an outspoken Communist, and he resented Linnet's wealth.

Can Poirot uncover the identity of the killer before the Karnak reaches the end of its journey?  He better hurry because the bodies are starting to pile up.

If I had heard of this 1978 take on Death on the Nile, I did not remember it.  I decided to watch it when I learned that director Kenneth Branagh was directing a new film version of Agatha Christie's novel, which was released to theaters earlier this year (2022).  Branagh also directed a 2017 film version of Christie's world famous novel, Murder on the Orient Express.

I enjoyed the 1978 Death on the Nile, but not as much as I enjoyed the 1974 Murder on the Orient Express, which starred Albert Finney as Hercule Poirot.  When Finney decided not to return for Death on the Nile, actor Peter Ustinov was cast to play Poirot.  Finney's Poirot had a humorous side, but he was deadly serious about his profession and did not suffer fools.  Ustinov's Poirot is playful, but conceited, and even a bit randy.

Death on the Nile is a sedate film, its narrative lazily moving through this plot to match the languid pace with which the S.S. Karnak sails the Nile.  The performances are nice, but a number of luminaries who appear in this film, including Bette Davis, Angela Lansbury, and Maggie Smith, are merely passing through this film and resting on their laurels..  However, Mia Farrow proves just how good and perfect she is at playing crazy, unbalanced, and unstable characters.

Death on the Nile 1978 is a nice whodunit film and cozy mystery movie, and I would probably watch it again.  At times, it seems to be a surprisingly average and somewhat uninspired film, but, on the other hand, it has its charms.

Posted by Leroy Douresseaux at 12:52 PM