Comics Review: "PANTHA Volume 2 #3" - Pantha, I Love You, Girl; Your Comic Book is So Fine 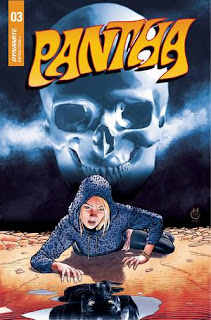 Pantha first appeared in Vampirella #30 (cover date: January 1974).  She is an ancient Egyptian queen who was cursed by the goddess of war and rage, Sekhmet, because of the murders she committed.  Pantha must walk the world forever, trapped between the forms of human and panther.  She will never know home or peace, burdened by the fury of a goddess and the rage of the innocents she ordered slain.

Pantha, like Vampirella, is now belongs to Dynamite Entertainment, which gave the character her own six-issue miniseries in 2012.  Pantha returns in a new comic book series, entitled Pantha Volume 2.  It is written by Thomas Sniegoski and Jeannine Acheson; drawn by Igor Lima; colored by Adriano Augusto; and lettered by Dezi Sienty, Carlos  M. Mangual, and Taylor Esposito.  In this new series, Pantha/Maatkar Samira must save the Egyptian pantheon from a mysterious adversary that is older than the gods and wants the gods' power.

As Pantha Volume 2 #3 (“By the Gods!”) opens, Samira faces Bastet and learns that the hands that control her fate have changed.  Meanwhile, Darian Blackwood, CEO of Blackwood Munition and the Egyptian god of war and chaos, is attempting to remove Sekmet's curse from Samira's soul in a bid to gain the goddess' power.

But their mysterious adversary, Ta'Nakht, the ancient god that wants to devour the “divinity” of every god, is not waiting for the pantheon of Egyptian to resolve its internal strife.  His forces strike, and even Pantha may not survive.  And who are “The Mortalists?”

THE LOWDOWN:  In July 2021, Dynamite Entertainment's marketing department began providing me with PDF review copies of some of their titles.  They recently provided me with a PDF for Pantha Volume 2 #3, which is only the third Pantha comic book that I have read.

Pantha Volume 2 is one of the best new titles of the year, and writers Thomas Sniegoski and Jeannine Acheson consistently author riveting chapters that end in shocking cliffhangers.  And there is always something new, a character or subplot, that will grab readers' imaginations.

Artist Igor Lima's illustrations and storytelling capture a kind of fantasy action that is similar to superhero comic books.  This third issue even seems like a kind of dark fantasy superhero comic, at least to me.  Lima balances the battles with the need to build on the series' mythology, and it all works as a thoroughly enjoyable, fun to read comic book.

I'll repeat what I said in my reviews of the first two issues.  Don't walk.  Don't run.  Drive like a maniac (without causing an automobile accident) to your local comic shop and get Pantha Volume 2 #3.

Posted by Leroy Douresseaux at 3:45 AM