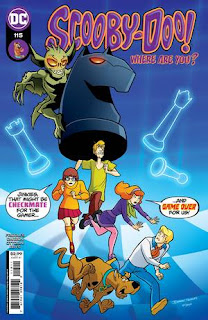 Scooby-Doo, Where Are You? #115 opens with “Ready Player Run!,” which is written by Derek Fridolfs and drawn by Walter Carzon and Horacio Ottolini.  The story finds Mystery Inc.:  Scooby-Doo, Shaggy, Fred, Daphne, and Velma at the headquarters of “Playtel,” the board game company.  Fred answered an ad so that the whole gang could “playtest” Playtel's latest game.

But Playtel has a surprise for all the testers.  They want to give players a new experience, and that means transporting players into virtual reality versions of their games via VR goggles.  But there is a glitch … err … gremlin in the VR system.  The “Grim Gamer” is out to win at all costs, and Mystery Inc. has a new mystery to solve.

The second story, “Endgame” is, as usual, a reprint story and is written by Sholly Fisch and drawn by Robert Pope and Scott McRae.  [This story was originally published in Scooby-Doo, Where Are You? #10 (cover date: August 2011).]  Mystery Inc. is attending the “World Video Game Championships,” which is sponsored by the video game company, Gamestation.

Competitors include the Tendo Brothers, Mario and Luigi, and the legendary player, Zelda.  But a ghostly figure, “The Pinball Wizard,” is demanding that this championship tournament be shut down.  Now, Gamestation's Laurie Kraft is desperate to save the tournament, so Mystery Inc. has another mystery to solve.

Right from the start, one reason for me to like “Ready Player Run!” is that it comes from Walter Carzon and Horacio Ottolini, one of my favorite Scooby-Doo comic book art teams.  Combined with Sivana Brys' lovely colors, “Ready Player Run!” looks gorgeous.  Writer Derek Fridolfs, another Scooby-Doo comics favorite, offers a cleverly constructed story right out of the kind of real-world corporate espionage that must be rampant in the video game industry.  I like this story, and I think it would make a good plot for one of those direct-to-DVD Scooby-Doo movies.

“Endgame” is written by another of my favorite Scooby-Doo comic book writers, Sholly Fisch, and is drawn by another of my favorite Mystery Inc. art dream teams, Robert Pope and Scott McRae.  The plot and the villain are good, but not great.  However, the story has a crazy last act – Shaggy and Scooby in a dance-off!  Yes, it's as fun as it sounds.

So, I recommend Scooby-Doo, Where Are You? #115 to all Scooby-Doo fans because it is one of the best issues of the series in the last year or so.  And until next time, Scooby-Dooby-Doo!