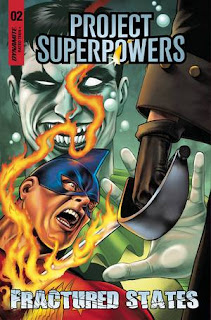 The characters return in the new comic book series, Project Superpowers: Fractured States Volume 1.  It is written by Ron Marz and Andy Lanning; drawn by Emilio Utrera; colored by Arthur Hesli; and lettered by Tom Napolitano.  The series is set in 2052 and finds the United States of America, post-disaster, fractured into warring regions.  Into this world, a mysterious man awakens, unkempt, naked, and abandoned in an underground base.  This “John Doe” finds the world turned upside down, but does he bring salvation … or doom?

As Project Superpowers: Fractured States Volume 1 #2 opens, John Doe is beset by dreams and visions of patriotic heroes hunted down by F-Troops.  But he has been captured by The Clown, who has plans for Joe Doe's virile and powerful body.  Can the Black Terror troops rescue him?  And just who is this new Black Terror?

THE LOWDOWN:  In July 2021, Dynamite Entertainment's marketing department began providing me with PDF review copies of some of their titles.  One of them is Project Superpowers: Fractured States Volume 1 #2, which is the second Project Superpowers comic book that I have read.

The manner in which writers Ron Marz and Andy Lanning present the story of Project Superpowers: Fractured States will not deter new readers.  I have not read read one single page of earlier Project Superpowers comic books, and I am having a blast reading this.  It is quite easy to follow and exciting to read.  Thus far, this series is part mystery, part dystopian sci-fi, and part superhero action-thriller, and it's killer cliffhangers are guaranteed to keep readers interested in what happens next.

I am in love with series artist Emilio Utrera's art and graphical storytelling.  Utrera captures the spirit of classic, old school superhero comic books.  He alone is worth the cover price of this title.  Arthur Hesli's moody colors complete the process in bringing this story to life.

I was shocked by the first issue, and this second issues has surprises for me, also.  I did not know what to expect of Project Superpowers: Fractured States Volume 1, and now, I can't wait for the next issue.  I highly recommend it.