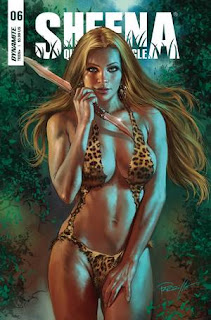 Dynamite began publishing Sheena comics in 2017.  Dynamite's second series is Sheena: Queen of the Jungle, Volume 2.  It is written by Stephen E. de Souza; drawn by Jethro Morales and Wil Rio; colored by Dinei Ribero; and lettered by Taylor Esposito.  Writer de Souza begins a new series of challenges for Sheena in the story line, “Cenozoic.”

Sheena: Queen of the Jungle, Volume 2 #6 opens in Cardwell Tower in Val Verde City, Val Verde, South America.  Cardwell Industries is making plans to develop the “Zona Prohibda,” a nature preserve in Val Verde's interior, for shale oil and fracking.  Sheena believes that the only way to stop that is to find the site “The Lost City of Piatiti.”  The United Nations would turn the location of the lost city into a “World Heritage Site,” thus shutting down any industrial development.

With a band of human and animal allies, Sheena heads into the unexplored interior of the country.  Of course, they will find more than they expected.

THE LOWDOWN:  In July 2021, Dynamite Entertainment's marketing department began providing me with PDF review copies of some of their titles.  One of them is Sheena: Queen of the Jungle Volume 2 #6, which is the sixth Dynamite Sheena comic book that I have read.

Sheena: Queen of the Jungle Volume 2 is one of my favorite Dynamite titles.  Writer Steven E. de Souza, known for his work in Hollywood as a writer, producer, and director of film and television, offers some nice intrigue, and I must admit that I find his version of Sheena a little more interesting.  She has layers to her personality and is sly, witty and resourceful … like Indiana Jones.  Issue #6 really only hints at what is to come, so I expect the seventh issue to be more explosive.

The art and graphics team returns with Wil Rio joining Jethro Morales on art, so readers will get more of the same beautiful art that has defined Sheena: Queen of the Jungle Volume 2.  Colorist Dinei Ribero and letterer Taylor Esposito also continue doing stellar work.  This continues to be an excellent adventure comic book in which every chapter has both a strong narrative and an intriguing cliffhanger.  Let's keep reading, shall we, dear readers?

Posted by Leroy Douresseaux at 2:10 PM