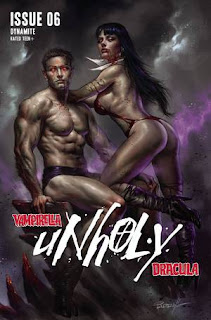 In 2010, Dynamite Entertainment obtained the character and has been publishing new Vampirella material since then.  Dynamite's latest Vampirella comic book series is a follow-up to the recently concluded Vampirella Volume 5 and is entitled Vampirella Dracula Unholy.  The new series is written by Christopher Priest; drawn by Donny Hadiwidjaja; colored by Mohan; and lettered by Willie Schubert.  The series follows Vampirella and her new husband, FBI Agent Mathias “Matt” Ecsed, who carries the “Dracula virus,” which might allow Dracula to return.

Where is Matt?  Where is Eriq Cannes, the man that was supposed to be Matt's husband?  Can Vampirella heal enough in time for a final face-off with Dracula, Lord of Evil?  And who is really going to be the “Bride of Dracula?”  The conclusion is here...?

THE LOWDOWN:  In July 2021, Dynamite Entertainment's marketing department began providing me with PDF review copies of some of their titles.  One of them is Vampirella Dracula Unholy #6.  It is one of many Vampirella comic books that have engaged my imagination these last few months.

Writer Christopher Priest is killing it with his two series, Vampirella Dracula Unholy and Draculina.  The sixth issue of the former emphasizes the intimate ties between the two series.  Unfortunately, Vampirella Dracula Unholy ends with this issue #6.  It is a good ending, but for me, it only proves that this could have been a long-running series or, at least, one that ran longer.

Throughout the series, artist Donny Hadiwidjaja has translated Priest's dark and moody storytelling into even darker and moodier comic book or graphical storytelling.  Hadiwidjaja's compositions and sense design also got stronger.  He captures the craziness of this last issue, balancing the violent battle with the poignant closer.

Well, I think Vampirella Dracula Unholy is going to give way to a new series, but it will make a good trade paperback collection for you, dear readers.

Posted by Leroy Douresseaux at 2:31 PM