Comics Review: "KILLADELPHIA #22" - How Many of Us Have Them 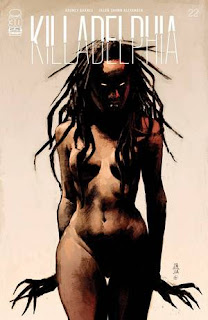 “The End of All” Part IV: “The Conversation”

Killadelphia focuses on James “Jim” Sangster, Jr. and his father, revered Philadelphia homicide detective, James Sangster, Sr., thought to be dead.  He is actually a vampire.  Now father and son lead a ragtag team comprised of a medical examiner (Jose Padilla), a dead president, and a rebellious, but special young vampire (Tevin Thompkins a.k.a. “See Saw”) in a bid to save Philly from an ambitious and murderous former First Lady, Abigail Adams.

As Killadelphia #22 (“The Conversation”) opens, Abigail and her coven are having an unpleasant conversation among themselves.  It gets more unpleasant when (vampire) George Washington, See Saw, and Aelio arrive for a deeper conversation.  It seems that these different factions must come together because the one true vampire king has returned to claim his throne and to lay waste to America.

Meanwhile, Jimmy and Tituba, the Stregherian witch, are still searching for See Saw.  They may have to throw more light on the situation than they expected... and they are also due for some conversation.

THE LOWDOWN:  We have entered the second half of Killadelphia's fourth story arc, “The End of All.”  It is an outta sight arc, and individually, so is Chapter Four, which resides under Jason Shawn Alexander's sexy-back cover.

Writer Rodney Barnes is a writer and executive producer on HBO's event series, “Winning Time: The Rise of the Lakers Dynasty.”  Reading Killadelphia is also a winning time because pretty much every issue introduces something entirely new that is entirely consequential, and totally amazing.  Killadelphia #22 is a basket of dark fantasy delights, featuring characters that could carry their own series, especially Tituba.  Here, what makes the characters rich is not so much their personalities as it is what they want.

Killadelphia #22 may also be the first time that I realized how artist Jason Shawn Alexander and colorist Luis Nct have managed to create such a menagerie of vampires and individual characters.  The characters with speaking roles have a unique look, and the coloring gives each one a visual and graphic personality.  It is a feast for the eyes and for the imagination.

Killadelphia #22 makes me feel like I have rediscovered the series, in a way.  Dear readers, I want you to discover it, also.

Reviewed by Leroy Douressesaux a.k.a. "I Reads You"

Posted by Leroy Douresseaux at 5:30 AM