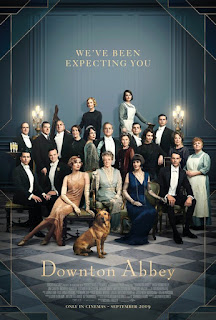 Downton Abbey is a 2019 historical drama film directed by Michael Engler.  It is based on the British television series, “Downton Abbey” (ITV, 2010-15), which was created by Julian Fellowes, who also wrote the screenplay for this film.  Downton Abbey the movie continues the story of the Crawley family as they prepare the family estate for a royal visit.

Downton Abbey opens in 1927, eighteen months after the end of the television series.  Robert Crawley, Lord Grantham and 7th Earl of Grantham (Hugh Bonneville), receives word that King George V (Simon Jones) and Queen Mary (Geraldine James) intend to visit Downton Abbey during their royal Yorkshire tour.  Downton is the Crawley family's large estate in the English countryside of Yorkshire (County of York).  Both the family and the staff of Downton Abbey are excited by the news.

Lord Grantham puts his daughter, Lady Mary Talbot (Michelle Dockery), in charge of the preparations for the visit.  Lady Mary feels that the current head butler, Thomas Barrow (Robert James-Collier), is ill-equipped to manage such an important event.  Thus, she recruits retired head butler, Charles Carson (Jim Carter), to briefly return from retirement in order to assist her, much to Barrow's chagrin.  However, once members of the royal staff begin to arrive at Downton in advance of the King and Queen themselves, they act rudely towards the Downton staff and make it clear that they will supplant them for the duration of the royal visit.

Meanwhile, a feud brews between Lord Grantham's mother, Violet Crawley, Dowager Countess of Grantham (Maggie Smith), and Maud, Lady Bagshaw (Imelda Staunton), the Queen's lady-in-waiting and a relative of the Crawleys.  Lord Grantham is Maud's first cousin once removed, so he should inherit Maud's estate.  However, Maud has plans regarding her maid, Lucy Smith (Tuppence Middleton), who has a mysteriously close relationship with Maud.  Meanwhile, Tom Branson (Alan Leech) meets Lucy, and they strike up a friendship.

These are just a few of the drama and melodramas, both large and small, that brew as a royal visit threatens to upend the lives of those upstairs and downstairs at Downton Abbey.

The original television series, Downton Abbey, began airing on the British television network, ITV, in 2010 and ended in 2015, after six seasons and 52 episodes.  It aired on the American broadcast network, PBS, as part of its “Masterpiece” series from 2011-20, before moving onto streaming services, Peacock and Netflix.  The final episode of “Downton Abbey” was set on New Year's Eve, 1925, and the movie is set 18 months after the TV series finale, according to an interview the writer and director gave to the Hollywood film site, The Wrap.  The King George V depicted in this film reigned from 1910 to 1936.  He was also the father of the next king, Edward VIII, who abdicated a few months into his reign.  Thus, George V's second son, Prince Albert, Duke of York, became King George VI, who was also the father of the current Queen Elizabeth II.

When I first heard of “Downton Abbey,” I mostly ignored it, although I watched a few minutes here and there.  One Sunday afternoon, however, while channeling surfing, I came across the show and recognized an actor (maybe American actress Elizabeth McGovern).  I decided to see what she was doing on the show and within a few minutes I was hooked.  It wasn't until two hours later I realized that I still had chores to do, but it was hard to pull myself away from the TV.  I found myself in the thrall of “Downton Abbey's” hypnotic powers.

I also found Downton Abbey the movie hypnotic.  It offers many of the same ingredients of the television series that made it so popular and have since made it an enduring favorite.  The film both expands and extracts those elements, as needed, for the main plot – the royal visit.  Actually, creator Julian Fellowes' screenplay allows all the regular members of the TV cast to do what is expected of their respective characters, while allowing them to shine in the small moments of this film.  New characters, such as Imelda Staunton as Cousin Maud and Tuppence Middleton as her maid, Lucy, who shine in their respective supporting roles.

Some of the subplots here could work as story lines for an entire season of the television series.  That includes an assassination subplot and a first gay romantic experience, the former seeming forced and unauthentic and the latter being something beautiful, but woefully underdeveloped.