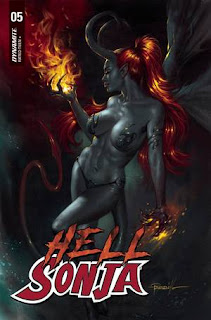 Red Sonja remained a fixture in comic books from then until about 1986.  In 2005, Dynamite Entertainment began publishing comic books featuring differing versions of the character.  One of those is a spin-off title, Hell Sonja.  The series is written by Christopher Hastings; drawn by Pasquale Qualano and Andres Labrada; colored by Ellie Wright and Kike J. Diaz; and lettered by Jeff Eckleberry.  The series focuses on Hell Sonja, who intercepts the prayers of the desperate and then, sends her team of champions (strike team) to fill Hell's belly with would-be conquerors and those most deserving of its punishment.

The damned prisoners join forces not to escape, but to overthrow Hell Sonja when she is at her weakest, and without allies.  After all, even her strike team of champions:  Red Sonja, Blue Sonja, Moon Sonja, and Gold Sonja are now dead and in the thrall of the True King of Hell.  Is this what Hell Sonja deserves because she tried to take the throne for a kingdom she does not fully understand?  Who will get to feast on the souls in Hell's belly?  And will her champions return?

THE LOWDOWN:   In July 2021, Dynamite Entertainment's marketing department began providing me with PDF review copies of some of their titles.  One of them is Hell Sonja #5, which is one of several Red Sonja-related comic books that I have read.

What can I say.  Hell Sonja #5 offers a tidy ending(?) to the series and offers some details about how the universe works.  Writer Christopher Hastings' and the creative teams gave readers something weird and offbeat.  Might we get more?  I think Hell Sonja has a lot of potential, but will it get a chance to reveal itself?

Posted by Leroy Douresseaux at 7:27 PM