Review: 2022 Version of "DEATH ON THE NILE" Is Dark and Edgy on the Nile 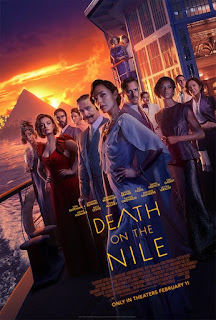 Death on the Nile is a 2022 mystery film directed by Kenneth Branagh.  It is based on the 1937 novel, Death on the Nile, written by Agatha Christie (1890-1976).  In Death on the Nile the movie, Hercule Poirot investigates the murder of a young heiress that occurs on a ship sailing the Nile

Death on the Nile finds famous detective, Hercule Poirot (Kenneth Branagh), embarking on a luxurious cruise on the Nile River in Egypt.  Poirot is delighted to discover that his friend, Bouc (Tom Bateman), will also be aboard the ship named the “Karnak.”

Also aboard are the newlyweds:  wealthy heiress, Linnet Ridgeway (Gal Gadot), and her husband, Simon Doyle (Armie Hammer).  While in Egypt on their honeymoon, they are being stalked and hounded by Simon's former fiancé, Jacqueline “Jackie” de Bellefort (Emma Mackey), who was also Linnet's close friend.

When Linnet is found shot to death aboard the Karnak, Jackie is the most obvious culprit, but there are others on board who have reason to want Linnet dead.  There is Linnet's maid, Louise Bourget (Rose Leslie), who was bitter because her mistress sabotaged her engagement.  Linnet's attorney and estate trustee, Andrew Katchadourian (Ali Fazal), was stealing from her, although they were cousins.  Linnet's godmother, Maria van Schuyler (Jennifer Saunders), is a socialist who gave away her wealth, but stands to inherit some of Linnet's estate.  Bowers (Dawn French), van Schuyler's nurse, blamed Linnet's father for financially ruining her family.

Salome Otterbourne (Sophie Okonedo), a brassy blues and jazz singer and guitarist, and Rosalie (Letitia Wright), her niece and manager, were once the target of a racist complaint by Linnet.  However, Rosalie became Linnet's friend in boarding school and admits that there are reasons to both hate and love Linnet.  Dr. Windlesham (Russell Brand) was once engaged to Linnet, but she left him for Simon.  Bouc's mother, Euphemia (Annette Bening), resented Linnet for introducing Bouc to Rosalie.

Poirot must uncover the identity of the killer.  He better hurry because the bodies are starting to pile up.

In this new version of Death on the Nile, there is an attention to detail.  The audience can see it in the lighting, the hair and make-up, the costumes, the art direction, the editing, and the score.  This is also to create Hercule Poirot's world of light and much darkness and shadows.  Early in the film, writer Michael Green and director Kenneth Branagh take us to the World War I life of Poirot, tragedy on the battlefield and off sets the stage for what would become the future great detective's world.  Shadowy nightclubs filled with earthy blues and showy jazz music; sumptuous desserts; lavishly appointed night people; sunny paradises; and exotic locales – everything has a dark side.  It does not matter how golden hued anything is; there is darkness.  Even the dark side has a darker side.

All the performances are topnotch; Branagh even gets a showy transformation from comedian Russell Brand, here, being his best PBS Masterpiece self.  Good acting sells Death on the Nile's central theme that envy, greed, lust, and pride will destroy friends and lovers.  They will even lead to murder most foul, of course.

Branagh takes the cynicism of post-war American Film-Noir and pours it all over Dame Agatha Christie's storytelling.  Rarely has such cinematic beauty dressed so much evil and darkness.  The lovely meets the lethal.

Death on the Nile 2022 starts slow and drags for some time.  For a time, it takes Sophie Okonedo lip-syncing Sister Rosetta Tharpe to give the film early heat.  Linnet Ridgeway's murder, however, lights a fire under Death on the Nile as it moves to its ending of triumphant tragedy.  There is no victory in the resolution of this case – only hurt and grief.  Maybe, hurt and grief are the victors.  The viewers are also victors, as Branagh orchestrates another unique and winning take on the cozy, old mysteries of Agatha Christie.

Posted by Leroy Douresseaux at 1:52 PM