Review: "John Wick: Chapter 3 – Parabellum" Will Help You Get Your Keanu On 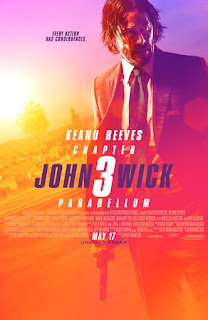 John Wick: Chapter 3 – Parabellum is a 2019 action and crime-thriller starring Keanu Reeves and directed by Chad Stahelski.  It is a direct sequel to 2017's John Wick: Chapter 2 and the third film in the John Wick film series.  Parabellum finds John Wick on the run with a price on his head and assassins everywhere looking to claim the reward for killing him.

As John Wick: Chapter 3 – Parabellum opens, John Wick (Keanu Reeves) makes his way through Manhattan.  John is on the run because he is just about to be labeled “excommunicado.”  His crime was the unauthorized killing of “High Table” (the ruling entity of the assassin's guild) crime lord, Santino D'Antonio, on the grounds of the New York Continental Hotel, a “consecrated” space where killings are not allowed.  At 6 PM Eastern Standard Time, when John is officially “excommunicado,” there will be a 14 million dollar bounty on him, and hit men and hit women everywhere are going to target him.

John turns to a few old acquaintances for help on his way out the city.  He travels to Morocco where he hopes to find the “Elder,” the boss (more or less) of the High Table, whom John believes will restore his status.  In Casablanca, John seeks help from Sofia (Halle Berry), a former friend and manager of the Moroccan Continental, but an old grudge might stand in the way of her helping him.  Meanwhile, the High Table has sent an “Adjudicator” (Asia Kate Dillon) to deal with everyone who has helped John, including the Continental's manager, Winston (Ian McShane), and the crime lord, “The Bowery King” (Laurence Fishburne).

A few weeks ago, a cable television listing reminded me that I had not seen  John Wick: Chapter 3 – Parabellum, so I turned to “DVD Netflix” for help.  In my reviews of the earlier John Wick films, I wrote that I had been a fan of Keanu Reeves since I first encountered him the 1980s in films like Dangerous Liaisons (1988) and River's Edge (1986), although I am not a fan of his popular 80s film, Bill & Ted's Excellent Adventure (1989).  I also wrote that I had never thought of Reeves as a great or even as a good actor; he is either way too stiff or too wooden as a performer.  Still I have enjoyed and even loved Reeves in films like the original Point Break (1991) and in The Matrix film trilogy.

Reeves' star had dimmed for several years, but the John Wick films' success and an appearance in Toy Story 4 saw people feeling that Keanu love again.  And we're supposed to get The Matrix: Resurrections in December 2021.  What can I say about John Wick: Chapter 3 – Parabellum?  The truth is that if you enjoy Keanu Reeves' films, you will enjoy Parabellum.

I can't fake it and say that this is about the love of cinema.  I love seeing Keanu in this film's violent fight scenes and bloody shootouts, with their gunshots to the head and blood spurting and ejaculating from bodies and heads.  Parabellum gives us the added joy of marital arts sword play, with Mark Dacascos as the character “Zero.”  He is Japanese assassin leading a team of ninja-like assassins, slashing and stabbing many other characters, but their ultimate goal is John Wick.

Keanu Reeves is one of my favorite movie stars, and John Wick is one his roles that I love the most.  Yes, Parabellum's main ambition is to present itself as revenge-thriller with a little wit, a little more style, and even more stylized ultra-violence.  And I like John Wick: Chapter 3 – Parabellum enough to give it a fairly high grade and to also eagerly await a fourth installment in this thrilling franchise.