Review: "NEVER RARELY SOMETIMES ALWAYS" is Timely, Could Be Timeless 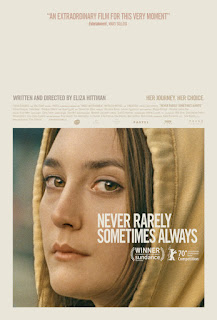 Never Rarely Sometimes Always is a 2020 British-American drama from writer-director Eliza Hittman.  The film focuses on a rural Pennsylvania teenager who, seeking an abortion, embarks on a fraught journey to New York City in order to get one.  Oscar-winning filmmaker, Barry Jenkins (Moonlight), is one of the film's executive producers.

After learning that she is unable to get an abortion in Pennsylvania without parental consent, Autumn confides in her cousin, Skylar (Talia Ryder), that she is pregnant.  Autumn and Skylar buy two bus tickets and travel to New York City where Autumn can have an abortion with parental consent.   The journey, however, is fraught with complications, including the fact that the girls have little cash and have no place to stay in the city.  And getting an abortion is not as easy, nor will it be as quick, as Autumn thought.

Roe v. Wade (1973) is a landmark United States Supreme Court decision.  The Court ruled that the Constitution of the United States protects a pregnant woman's liberty to choose to have an abortion without excessive government restriction, and, in the process, struck down many U.S. federal and state abortion laws.  However, beginning with Webster v. Reproductive Health Services (1989), the Supreme Court essentially began allowing states to impose restrictions and regulations on a woman's right to have an abortion.  In the ensuing four decades, some of the restrictions placed by states can rightly be called “excessive,” to one extent or another.

That is the context in which Never Rarely Sometimes Always exists.  Autumn and Skylar embark on a fraught journey from small town Pennsylvania to New York City, knowing no one, not having a place to stay, and lacking adequate money so that Autumn can have an abortion.  And Autumn must face having this serious medical procedure as a minor, unsure of what support that she would get from her mother and (apparent) stepfather.

What hangs over this powerful drama is that Autumn is exposing herself and Skylar to danger because the state in which she lives, Pennsylvania, can place multiple restrictions on what is supposed to be a Constitutionally guaranteed right.  In theory, Autumn should have relatively easy access to safe medical care in her home state, yet what she does have in her home town is access to medical care, in which the facility's agenda takes priority over her health and well being and her choices.

In Never Rarely Sometimes Always, writer-director Eliza Hittman is advocating for abortion rights and access, yet she does all her preaching in a film that essentially has two parts.  The first is the story of a teenage girl facing a crisis, and the second part is a kind of dark New York adventure in which the young heroes must, by hook or crook, stay safe in order to enjoy a triumph – even if they cannot really celebrate such a triumph – Autumn getting her abortion.

Never Rarely Sometimes Always takes its title from the multiple choice answers that Autumn can give to a series of questions about her sex life asked by an abortion counselor.  It is in that moment, when Autumn struggles to answer, that Hittman depicts the reality that there is complexity behind a woman or girl's decision to seek an abortion.  It isn't simply about having an “abortion-on-demand.”

Posted by Leroy Douresseaux at 12:46 PM