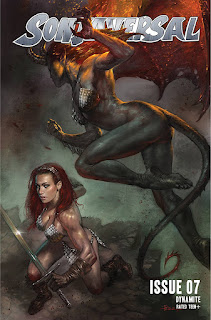 Red Sonja remained a fixture in comic books from then until about 1986.  In 2005, Dynamite Entertainment began publishing comic books featuring differing versions of the character.  One of those is a spin-off title, Sonjaversal, which sees Red Sonja battle other versions of herself from different dimensions.  Sonjaversal is currently written by Christopher Hastings; drawn by Pasquale Qualano; colored by Kike J. Diaz; and lettered by Hassan Otsmane-Elhaou.

Sonjaversal #7 opens in the world of Yellow Sonja, vampire hunter.  In her world, however, vampirism is not a mystical curse, but it is a disease, one that mutates.  The mutation that most troubles Sonja is the one that has apparently allowed a vampire she already killed to return to life.  Also, Yellow Sonja's late parents were also vampire hunters … who were turned into vampires … forcing Sonja to kill them.  Well, they are back, too!  So what are they up to?

Meanwhile, in outer space, there is Purple Sonja.  And like the other Sonjas, she is being vexed by Hell Sonja.

THE LOWDOWN:   Dynamite Entertainment's marketing department recently began providing me with PDF review copies of some of their titles.  One of them is Sonjaversal #7, which is the second issue of the title that I have read.

I enjoyed the sixth issue of Sonjaversal, but I find myself really liking Sonjaversal #7.  Well, I am a sucker for vampires, but writer Christopher Hastings offers a story that has an intriguing vampire mystery and is also droll and witty.  What can I say?  This comic book surprised me.

The art team of illustrator Pasquale Qualano and colorist Kike J. Diaz is consistent in this seventh issue, where I found them inconsistent in the sixth.  Here, Qualano's storytelling flows and Diaz's coloring has a kind of psychedelic affectation.  Luckily, Hassan Otsmane-Elhaou's stylish lettering also conveys the snappy fun of this offbeat vampire horror fiction.  I am recommending Sonjaversal #7 to you, dear readers, just because it is a fun read.

Posted by Leroy Douresseaux at 9:25 PM