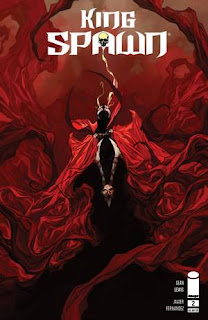 King Spawn #2 opens in the wake of a bombing at an elementary school in Seattle, Washington.  The bombing killed sixteen people, including fourteen children, aged five and six years old.  An underground religious group, “Psalms 137,” seem to be the culprits behind this attack, but what do they really want – beyond killing more children or “innocents?”

Al Simmons is filled with rage because he knows that someone is slaughtering children in order to draw Spawn out into the open.  He is so angry that he even calls upon a former friend to help him, but he does not want  his current crew helping him, which includes Jessica Priest, the newly minted “She-Spawn.”  However, there is an even darker reunion afoot.  One of Spawn earliest and most despicable adversaries returns, as a showdown in Washington, D.C. looms.

THE LOWDOWN:  I mentioned in my review of the first issue of King Spawn that I read Spawn #1 back in 1992, and while I had mixed feelings about it, I found myself following the series.  I was a dedicated reader and followed the series for another five or six years.

King Spawn #1 was the first time I read a Spawn first issue since I read Curse of the Spawn #1 back in 1996.  I guess I was waiting for the return of the king because after reading this second issue, I can say that King Spawn is fucking awesome.  Hell, no!  I'm not going to use the phrase, “freaking awesome,” when I know that King Spawn is “fucking awesome.”  Bitch, please! dear readers.  I'm keeping it real for your hard earned money.

Writer Sean Lewis has taken the inspired madness and crazy potential of those early years of the original Spawn and used that to turn King Spawn into a must-read.  Lewis' script for the second issue has taken Al Simmons from one angry man to one crazily vengeful man.  Lewis has also made Spawn something like the best of Frank Miller's Batman of Batman: The Dark Knight Returns and of Steven Grant's The Punisher of the 1980s.

I love Javi Fernandez's art.  His graphical storytelling shares a sensibility with McFarlane's, which was more dark fantasy than vigilante fiction.  Fernandez's balances his art with both a clear-line style and with heavy textures, which makes for a fuller and richer story.  The darkness and the violent action explode off the page, but the character drama is equally forceful.

FCO Plascencia's Hell-spawned hues allow the story to operate under multiple moods and atmospheres which convey the shifting realities of the story.  Meanwhile Andworld Design's quiet lettering imparts the action and drama with a steady beat that carries the imagination through this narrative.

I heartily recommend King Spawn.  It has activated me to find my way back to the original Spawn series and to prepare for the upcoming new Spawn titles.

[This comic book includes “Spawning Ground” Presents “The Breakdown,” which features an interview with Javi Fernandez.]