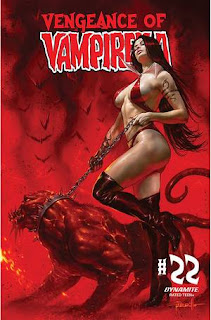 One of Dynamite's Vampirella comic book series is Vengeance of Vampirella, which was also the title of a Harris Comics series.  Vengeance of Vampirella Volume 2 is written by Thomas Sniegoski; drawn by Michael Sta. Maria; colored by Omi Remalante, Jr.; and lettered by Troy Peteri.  The series focuses on a reborn Vampirella, fighting the forces of chaos to save humanity and then, trying to live in the world after the fight.

Vengeance of Vampirella Volume 2 #22 finds Vampirella and her traveling companion, Jeannine, on the road … and in trouble.  They came across a middle-age couple, Phil and Agnes, in need of protection.  Appreciative of the help, Phil and Agnes offered Vampirella and Jeannine a hot bath and a home cooked meal in their hometown of Surette.  Vampirella finds Surette strangely undamaged compared to virtually everywhere else, but their hosts assured her that their peace and quiet was the result of luck.

That luck, however, is a dragon named “Mandrasath,” who protects Surette … as long as the townsfolk offer him sacrificial victims.  Well, between Vampirella and Jeannine, which is the sacrifice?  And which is the one destined to bring it all down?  The answers will surprise.

THE LOWDOWN:  Dynamite Entertainment's marketing department recently began providing me with PDF review copies of some of their titles.  One of them is Vengeance of Vampirella Volume 2 #22.  It is the third issue of this series that I have read, and one of a growing number of Vampirella comic books that I have recently read.

Writer Thomas Sniegoski offers a nice change of pace with his scripts for issues #21 and #22.  The story is of a familiar type, one now called “folk horror,” but Sniegoski is giving us the Vampirella twist.  Vengeance of Vampirella #22 is the best issue of the series that I have read, yet.  I thoroughly enjoyed reading it, mainly because I thoroughly enjoy seeing scheming, murderous assholes getting their comeuppance and a lot more.

The art and storytelling by Michael Sta. Maria still recalls classic Warren Publishing Vampirella, but in this issue, he draws some tightly-paced and expertly delivered action.  I tore through this comic book, so I look forward to Michael giving us more kick-ass action.  Omi Remalante, Jr.'s rich colors amp up the fantasy violence, which makes the gore all the sweeter.  And letterer Troy Peteri – he presents a word balloon symphony of grunts, growls, howls, and the screams of pain, glorious pain.

Since I reviewed issue #20, I have been saying that I wanted more Vengeance of Vampirella Volume 2.  Yeah, I want more, and I want you to join me.

Posted by Leroy Douresseaux at 4:46 PM