Review: "BATMAN: Hush" Film is as Mediocre as Its Source Material 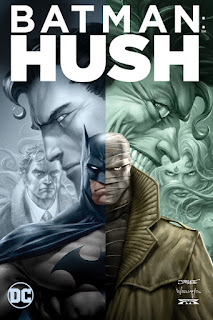 Batman: Hush is a 2019 straight-to-video animated superhero film from Warner Bros. Animation and director Justin Copeland.  It is the thirty-fifth film in the “DC Universe Animated Original Movies” series.  It is also a loose adaptation of the Batman story arc, “Batman: Hush” (Batman #608-619; cover dated: October 2002 to September 2003), written by Jeph Loeb and drawn by Jim Lee.  Batman: Hush the movie focuses on a mysterious villain intent on sabotaging Batman by using the Dark Knight's worst adversaries and some of his friends against him.

Batman: Hush opens with Batman (Jason O'Mara) rescuing an abducted child that the villain, Bane (Adam Gifford), was holding for ransom.  Shortly afterwards, Catwoman (Jennifer Morrison) steals the ransom.  While Batman is pursuing her, a masked vigilante shoots at him, severing the Bat-rope Batman was using to swing through the city.  Batman falls onto the sidewalk and cracks his skull.

Back on his feet, Batman discovers that his conflict with Bane and Catwoman was just part of an elaborate scheme perpetrated against him by a mysterious villain known only as “Hush.”  It seems that Hush is willing to use every major figure in Batman's “rogues gallery” to bring the Bat down.  Hush seemingly even knows the people close to Bruce Wayne and is using them.  Further complicating Batman's investigation of Hush is the growing relationship between Bruce Wayne and Catwoman's alter-ego, Selina Kyle.

I have only read the Batman story line, “Batman: Hush,” once, and that was during its original publication.  I found it to be longer than it needed to be.  I am not really a fan of writer Jeph Loeb, although he has written some comic books that I have thoroughly enjoyed.  As a story, “Hush” felt like something Loeb padded with a bunch of appearances by all-star DC Comics characters.  As beautiful as Jim Lee's art for Hush was and still is, some of it came across as cold, as if it were drawn in a manner to make it attractive to collectors of comic book original art.  But at least I found “Hush” the comic book story to be enjoyable most of the time.

Batman: Hush the film is mostly dull.  The chase between Batman and Catwoman and the subsequent Catwoman-Batgirl fight are exciting.  The big battle at the end of the film is good, except when it seems to run too long – of course.  Catwoman is well-written in this film, and I like the way Alfred Pennyworth and Dick Grayson/Nightwing are presented in Batman: Hush.

The character designs are mostly good, except Batman, who looks awkwardly drawn in this film.  The animation is mediocre, except for a few action scenes when it looks like the people involved in this production suddenly felt energized.  I will only recommend this film to fans of the “DC Universe Animated Original Movies” line.  People who mostly know Batman from the modern Batman live-action films will likely not find much to like in Batman: Hush.