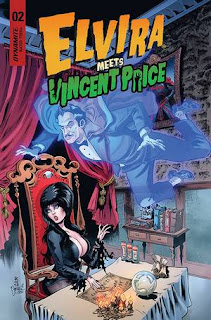 Chapter Two: “Ankhs for the Mammaries”

Elvira and Vincent Price team up for the first time in the comic book miniseries, Elvira Meets Vincent Price.  The series is written by David Avallone; drawn by Juan Samu; colored by Walter Pereyra; and lettered by Taylor Esposito with Elizabeth Sharland.  The series finds Elvira and Price searching for a long-lost cult movie in order to save the world from the wrath of an awakened Egyptian god.

As Elvira Meets Vincent Price #2 opens, Vincent uses his ghostly wiles to save Elvira from a violent servant of Amun-Ra.  That's right.  That is just a taste of the Armageddon to come if Elvira and Vincent don't find the only surviving copy of the lost cult film, “Rise of the Ram.”  Price starred in the doomed, never-seen film, and now, it is time to start finding the rest of his collaborators on the film, who may know something about the whereabouts of Rise of the Ram.

So our heroic duo flies to England to find Richard “Rick” Rogue, the director of “Rise of the Ram,” and his wife, Claudia Antonelli, the Italian starlet who was Vincent's costar in the film.  But Rick and Claudia have their own problems, and Elvira is about to be the unwilling solution.

THE LOWDOWN:  I have been a fan of writer David Avallone's Elvira comic books for a few years now.  Elvira Meets Vincent Price reminds me, if I need a reminder (which I don't), why I love these comic books so much.

After a cool first issue, Avallone delivers a script for the second issue that is so witty and sparkling that I wish I had a 100 pages more of it.  It's like “Scooby-Doo, Where Are You!” blended with the team of Bob Hope and Paulette Goddard in The Ghost Breakers (1940).

Walter Pereya's colors capture the sparkle and ghostly chemistry in Avallone's script, while the lettering by Taylor Esposito and Elizabeth Sharland conveys the breezy pace of the story.  I'm having a blast reading Elvira Meets Vincent Price.  It is almost too good to be true how well this crossover works.  And yes, I already want a sequel.

Posted by Leroy Douresseaux at 11:31 AM